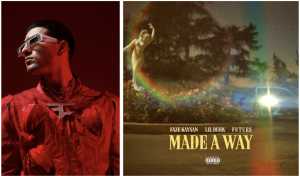 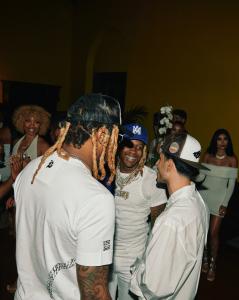 FaZe Kaysan arrives today with his debut single “Made A Way” feat. Lil Durk & Future (Listen HERE). The release comes days after Kaysan was announced as the newest member of FaZe Clan, the world’s most prominent gaming organization. The track, available via UnitedMasters, was co-produced with WondaGurl [Kanye West, Drake, Travis Scott, JAY-Z] and is already gaining buzz after Charli D’Amelio posted two TikTok videos to the track this weekend, which have collectively garnered over 15 million views. The music video starring all three artists will be released soon.

“It was a lot of fun connecting with Kaysan on this project,” says WondaGurl. “He has a great vibe and is super enthusiastic, two things that are really important to me when I’m working with new artists. Kaysan has a vision for himself and is driven to succeed and make his mark.”

“Kaysan is an extremely hard worker and I’ve seen how motivated he is to show everyone what he can bring to the table,” says Kaysan’s Creative Director RAYSCORRUPTEDMIND. “I’ve been in the music industry for a while now and it’s refreshing to see an artist like Kaysan who not only believes in himself and is willing to put the work in but makes everyone who comes into contact with him feel special.”

“Beyond Kaysan’s skills as a producer and DJ, his ability to uniquely identify and bring various creatives together for a single project is his superpower,” says Darren Yan, Head of Talent at FaZe Clan. “He had a complete vision for this project and every collaborator from his co-writers to the featured artists to director of the music video were all precisely calculated in his mind. Not many can execute in the way Kaysan can and that was a driving force of why FaZe Clan signed him as our first artist.”

FaZe Kaysan, producer, DJ, creator and artist embarks on the FaZe lifestyle as not only an artist, but also as a gamer, asserting himself as an inimitable multi-hyphenate whose impact fissures through music, video games and culture at once. FaZe Kaysan is notably the organization’s first ever in-house music artist and gamer hybrid. The announcement video released earlier this week sees Kaysan being welcomed into FaZe alongside all of his closest friends, who happen to be some of the world’s favorite influencers, content creators and artists like Diplo, Charli & Dixie D’Amelio, Addison Rae, Noah Centineo, Noah Beck, Taco, Adin Ross, Madison Beer, StassieBaby, Kyle Kuzma, Nikita Dragun, Larray and Luka Sabbat to name a few. Click HERE to watch.

About FaZe Kaysan:
FaZe Kaysan simultaneously charges forward as a music artist and a gamer, asserting himself as an inimitable multi-hyphenate whose impact fissures through music, video games, and culture all at once. Standing out as FaZe Clan’s first-ever native music artist, Kaysan distinguishes himself as a rare talent who’s original music with GRAMMY® Award-winning hip-hop titan Future is equally as compelling as his Call of Duty streams and gaming content. Growing up in Los Angeles, music found him at a young age. He studied piano for seven years and excelled during recitals. He also vividly recalls maxing out the memory of his old school RAZR phone with classics such as Linkin Park’s “In The End.” Music festivals offered a much-needed escape from a turbulent and often trying high school experience as he fully immersed himself in hip-hop and electronic music. He went on to pick up Ableton and started to create music of his own, cooking up beats at a prolific pace. At the same time, his love for gaming continued to grow and he began to attract a following on Twitch, playing franchise favorites such as Call of Duty, Grand Theft Auto, NBA2K, and more. Everybody from Adin Ross to members of FaZe Clan raided his streams, attracted by both his sheer talent as a gamer, sense of humor, and subtle mystique. FaZe Clan became instantly intrigued by his quiet influence. His name floated around mutual social circles occupied by FaZe Clan members for months, piquing curiosity about him and inspiring them to want to know more. He linked up with FaZe Temperrr in 2020 and officially joined as a member in 2021, and will be announced as their newest signing imminently. Now, he traffics in a lane of his own at lightspeed, and will make his debut with a massive single, “Made A Way” [feat. Lil Durk & Future].

About FaZe Clan:
Since its inception in 2010, FaZe Clan has established itself as the world’s most prominent and influential gaming organization known for its disruptive original content and hyper-engaged global fanbase of over 350 million combined across all social platforms. FaZe Clan holds an unrivaled position at the epicenter of gaming, sports, culture and entertainment, driving how the next generation consumes content, plays and shops. Their roster of 85 influential personalities consists of world-class gamers, engaging content creators and a mix of talent beyond the world of gaming, including NFL star Kyler Murray, Lebron “Bronny” James Jr and Lil Yachty. The organization’s unmatched esports division includes ten competitive teams in Call of Duty League (Atlanta FaZe), Fortnite, FIFA, FIFA Mobile, PUBG, PUBG Mobile, Rainbow Six, VALORANT, Rocket League and CS:GO with dozens of world championship trophies among them. In addition, FaZe Clan has become a sought-after fashion and lifestyle brand through an inspired apparel line and limited-edition collaborations with partners including Batman, McDonald’s, Takashi Murakami, Champion, NFL, Manchester City FC, Lyrical Lemonade, Kappa, CLOT, LA Kings, and more. Follow us @FaZeClan, @FaZeApparel and @FaZeUpdate.