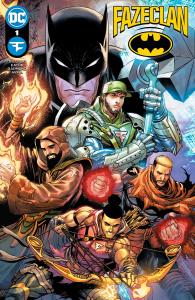 FaZe Clan is proud to announce a historic collaboration with DC for an original FaZe Clan comic book in celebration of Batman Month. The comic book, which features popular FaZe Clan members FaZe Banks, FaZe Apex, FaZe Temperrr, FaZe Rain, FaZe Adapt, FaZe Rug and FaZe Blaze, marks the first time a gaming organization has entered the DC Universe by way of a limited-edition comic book. FaZe Clan teased the collaboration yesterday across FaZe social channels followed by an official high-energy VFX announcement showcasing the original comic book and collection, watch HERE. Last week, members of FaZe Clan took an exclusive behind the scenes tour of the Warner Bros. lot and archives to get an indepth look at all things Batman. Fans can tune in to watch them geek out later this week on FaZe Clan’s YouTube channel.

The FaZe Clan x Batman comic book will come in five covers including four extremely-limited variant covers, each highlighting a founding member of FaZe Clan [FaZe Banks, FaZe Temperrr, FaZe Apex and FaZe Rain]. In conjunction with the comic book, FaZe Clan will also release a limited-edition merchandise collection in collaboration with DC. The collection, which features products such as esports jerseys in multiple colorways, tees, hoodie, pajama set, mousepad and more, will be available on September 24th at 12pm PT on fazeclan.com with select items available on shop.dccomics.com and NTWRK.

“I never would have thought we’d be doing a collaboration with DC,” says FaZe Rain. “This collaboration is extremely special to us because we all grew up on Batman and DC and to see ourselves as comic book Super Heroes is a dream come true.”

“It’s been an honor to work alongside such an iconic brand like DC,” says FaZe Clan Head of Marketing Xavier Ramos. “We loved the idea of taking on a new life form and creating something tangible for our fans for this special collaboration. To watch FaZe Clan transcend gaming into traditional entertainment over the years has been nothing short of extraordinary and we can’t wait for our fans to see all of the incredible projects we have coming up.”

“DC is excited to partner with FaZe Clan to share this custom Batman story with their amazing gaming fans,” says DC GM Daniel Cherry III. “This partnership is a great opportunity to invite even more fans into the iconic DC universe.”

The past year came with a lot of firsts for FaZe Clan. Earlier this summer, FaZe Clan became the first gaming organization to grace the cover of Sports Illustrated and pass 1 billion views on Giphy. This year, FaZe Clan saw a handful of first-of-its-kind merchandise collaborations with iconic brands such as Takashi Murakami, Xbox and OpTic Gaming. More recently, FaZe Clan teamed up with Seth Rogen for a HFC livestream event marking the first time Rogen has worked with a gaming organization.

About FaZe Clan
Since its inception in 2010, FaZe Clan has established itself as the world’s most prominent and influential gaming organization known for its disruptive original content and hyper-engaged global fanbase of over 350 million combined across all social platforms. FaZe Clan holds an unrivaled position at the epicenter of gaming, sports, culture and entertainment, driving how the next generation consumes content, plays and shops. Their roster of 85 influential personalities consists of world-class gamers, engaging content creators and a mix of talent beyond the world of gaming, including NBA star Ben Simmons, Lebron “Bronny” James Jr and Lil Yachty. The organization’s unmatched esports division includes nine competitive teams in Call of Duty League (Atlanta FaZe), Fortnite, FIFA, PUBG, PUBG Mobile, Rainbow Six, VALORANT, Rocket League and CS:GO with dozens of world championship trophies among them. In addition, FaZe Clan has become a sought-after fashion and lifestyle brand through an inspired apparel line and limited-edition collaborations with partners including Champion, NFL, Manchester City FC, Lyrical Lemonade, Kappa, CLOT, LA Kings, and more. Follow us @FaZeClan, @FaZeApparel and @FaZeUpdate.

About DC
DC, a WarnerMedia Company, creates iconic characters, enduring stories, and immersive experiences that inspire and entertain audiences of every generation around the world and is one of the world’s largest publishers of comics and graphic novels. As a creative division, DC is charged with strategically integrating its stories and characters across film, television, consumer products, home entertainment, interactive games, DC UNIVERSE INFINITE digital subscription service and community engagement portal. For more information visit dccomics.com and dcuniverseinfinite.com.