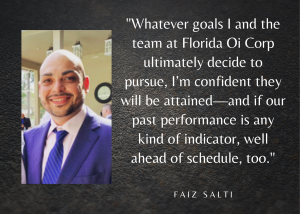 After gaining possession of 47 gas stations across Florida, the director of Florida Oil Corp has given himself an ultimatum to reach 50 by the end of 2022.

Being an entrepreneur is all about setting goals, meeting them, and then setting new ones.”
— Faiz Salti

TAMPA, FLORIDA, USA, October 6, 2021 /EINPresswire.com/ — The past three years have been kind to Faiz Salti. During that span of time, the founder, director, and registered agent of Florida Oil Corp has made significant inroads into the retail gas station market in the Sunshine State, with his company acquiring 47 gas stations in just over 1000 days in business—an accomplishment made even more remarkable considering the retail fuel industry is notoriously hard to break into in Florida. Nonetheless, Faiz Salti is not satisfied with his gains thus far, and has publicly declared his intention to expand further.

Upon being asked why ownership of 50 gas stations is such an important landmark, Faiz Salti replies, “Being an entrepreneur is all about setting goals, meeting them, and then setting new ones. To be perfectly honest, when I started Florida Oil Corp, I had a list of goals in my mind and a timeline in which to achieve them. I’m very happy to say that the company has now achieved all of those initial goals, and within my self-imposed timeline, at that. It’s time to make some new ones. Frankly, this new goal is eminently achievable. Although I specified that the company should acquire its 50th gas station by the year’s end, I expect it will happen before the summer of 2022 begins,” he muses confidently, concluding, “It ought to be a layup. Then we’ll move on to larger things.”

Asked what objectives he might set for himself and Florida Oil Corp once it has signed the deed on its 50th retail gas station, Faiz Salti responds, “I’ve already put considerable thought into that. I don’t think it’s out of the realm of possibility to acquire 75 stations in Florida by 2025. At that point, we’ll probably expand out of state, perhaps into Georgia, or Louisiana. Whatever goals I and the team at Florida Oi Corp ultimately decide to pursue, I’m confident they will be attained—and if our past performance is any kind of indicator, well ahead of schedule, too.”

As outlined in the preceding paragraphs, Florida Oil Corp owns and operates nearly four dozen gas stations throughout the State of Florida, including locations in Palmetto, Orlando, Sarasota, Port Richey, Newport Richey, and Bradenton, among many others. In contrast with its competitors, the company does not affiliate itself with any one oil multinational, instead maintaining its gas stations under numerous banners, such as Chevron, Shell, Circle K, BP, Mobil, Go Market, Thornton’s, and Sunoco.

Anyone curious to learn more about Florida Oil Corp is encouraged to keep watch for more press materials relating to its business ventures to be released in the coming weeks.

Faiz Salti is a career businessman and successful entrepreneur with 15 years experience as a gas station owner to his credit. He is the founder, director, and registered agent of Florida Oil Corp, a company headquartered in Tampa, Florida that owns and operates 47 gasoline stations throughout the state.

Incorporated in December of 2018, the company is a relative newcomer to the Florida gasoline retail sector, but has made impressive gains in its three years of existence. With its network of nearly four dozen gas stations across the state, Florida Oil Corp now accounts for more than 0.5% of Florida’s total market share of privately-owned gas stations.

Faiz Salti is also the co-founder and director of Faiz & Samad LLC, a sister company to Florida Oil Corp.