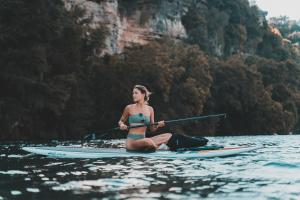 PENSACOLA BEACH, FL, USA, September 2, 2021 /EINPresswire.com/ — Experienced paddleboarder Gregory Brian Walters loves paddleboarding, as well as sharing his passion for this trending recreational activity with others. To help others get involved and dip their toes into this popular sport, Walters recently offered expert tips on the paddleboarding equipment and basic skills needed to get the most from one’s first paddle-powered experience.

The first thing new boarders need, says Walters, is a paddleboard. According to Walters, new boards can range from affordable to quite expensive. For those who are unsure about pursuing this new hobby months or years down the road, Walters recommends renting a board for the first time out.

In addition to the board, Walters recommends both a good paddle and a quality leash. According to Walters, the leash is what keeps boarders from losing the board when they fall off. For safety, he also suggests obtaining a belt-style life vest, an invaluable tool no matter what activity is taking place on the water.

Though it may be obvious to most, Walters also underlines the need for high-quality swimwear before hitting the water.

According to Walters, this basic equipment provides everything needed for novice paddleboarders to enjoy their first boarding experience.

How to Stand Up on a Paddleboard
Once the equipment is in place, says Gregory Brian Walters, the time has come for the fun part. As he notes, paddleboarding really gets going once the novice can stand up and control the board.

But to get there, says Walters, new boarders should follow a few important tips:

Start on calm water
According to Walters, new paddleboarders should always begin on the calmest, flattest water available. This makes learning a lot easier. When the novice boarder finds that water, he says, they should paddle out deep enough to where the fin is not only free but also where the boarder can fall into the water without getting hurt. He also recommends securely fastening the leash before setting out.

Take it slow
When the new boarder is ready, says Walters, they should slowly work themselves up to a kneeling position. He recommends staying on one’s knees for as long as it is comfortable. Walters also suggests taking some strokes with the paddle and getting a feel for the balance of the board.

Falling off is going to happen
It’s important, says Walters, to know that falling into the water is inevitable. After all, the new boarder is mastering a new skill, something that takes practice and learning. That said, Walters also knows that standing on a paddleboard is much easier than a surfboard, and once the new boarder does, he says they’ll be able to enjoy the serene, yet challenging experience.

Paddleboarding, says Walters, is a great sport for just about anyone. It toes the line between peaceful serenity and good exercise. It’s much easier to break into than many other water activities, but it offers a high ceiling of skill and pursuit for those who love it. It can be done solo or socially. It can be as relaxing or physically intense as needed. And it’s this flexibility, he says, that makes it a great sport for everyone.