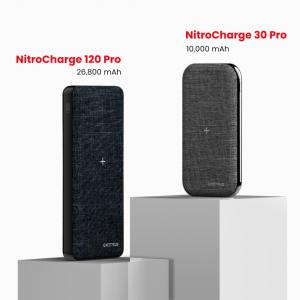 EXCITRUS Develops The NitroCharge Pro Series, the world’s first power bank featuring MagSafe.
EXCITRUS creates high-quality products that bring ease and convenience to user’s lives. Their power banks have been embraced by some of the largest US and Canadian retailers, such as Microsoft, Best Buy, Office Depot, Canada Computers, and The Exchange. They plan to continue to bring new and exciting innovations to the tech industry in the coming future. The newly launched Nitrocharge Pro Series offered unparalleled technology and revitalizes the way we choose our tech in the future.

There are thousands of wireless power banks on the market and many have their own disadvantages. Whilst some are slow chargers or have limited power ports, others may have a low capacity and simply unable to meet the demands of hectic lifestyles.
One common problem is that some powerbanks stop charging after just a little movement, from loose cables to insecure connections.
EXCITUS has created the NitroCharge 30 Pro & NitroCharge 120 Pro to fix these problems and revolutionize wireless charging through its unique patented technologies.

2. Keep Your Phone in Place: The wireless charging process can be easily disrupted with the slightest movement. NitroCharge Pro Series’ integrated MagSafe positioning technology inside the power bank ensures your iPhone stays in place to keep it powered throughout the day.

3. Larger Power Output: With an output of 30W (10,000 mAh capacity) and 120W (26,800mAh capacity), the NitroCharge Pro Series is more powerful than ever. Charge your phone, and your Macbook Pro simultaneously.