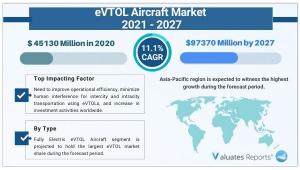 The eVTOL aircraft market size is expected to grow due to the increasing use of eVTOL in medical emergencies.

Due to technological expansion and greater investment in R&D by top players in the industry, the global eVTOL aircraft market size is expected to grow rapidly. In addition, major suppliers of eVTOL aircraft provide communication solutions for more reliable and improved customer experiences.

During the forecast period, the North American eVTOL aircraft market is projected to witness the highest growth. Increased investments by leading eVTOL and drone manufacturers to develop urban air mobility for commercial applications can be attributed to the market growth in this region. Furthermore, the ever-increasing trend of automation and globalization is accelerating the growth of eVTOL Aircraft Market size in Asia Pacific countries.

Based on type, the Fully Electric eVTOL Aircraft segment is projected to hold the largest eVTOL market share during the forecast period. This segment’s growth can be attributed to the production of various eVTOL aircraft by prominent market players. These aircraft are in the flight-testing stage and are planned to be marketed by 2025. This commercialization will enable companies to generate a huge number of taxi service provider contracts and partnerships from 2025 onwards.