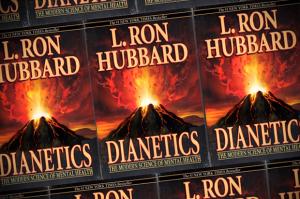 May 9, 1950, saw the call for a “European community” to repair society after WWII. And L. Ron Hubbard published Dianetics to help mankind repair their souls.

BRUSSELS, BRUSSELS, BELGIUM, May 9, 2021 /EINPresswire.com/ — On May 9, 1950, there was the call for a “European community” to repair the devastation after World War II and what is known as the Schuman Declaration. He proposed the pooling of French and West German coal and steel industries, and which later led to the creation of the European Coal and Steel Community, the first European Community, established on 18 April 1951. This evolved into the European Union.

However, in addition to all these economic, political, and one could even say… geographic, this very May 9th 1950, on the other side of the world, occurred an unexpected event. The launching spanned beyond any type of politics or ideologies, and according to Scientologists “its final purpose has always been peace”. This event was the publication of a book which technique has influenced the life of millions and millions of people not just in Europe but around the world.

Its title is DIANETICS, which philosopher and World Guinness Record writer L. Ron Hubbard, piblished on May 9th 1950. And while it started covering how could one become in control of his/her own mind to achieve personal and social peace, it developed into a practical religion, Scientology, and the members of this recognized religion celebrate worldwide its publication [watch a short introduction in Scientology Network].

This book launched by L Ron Hubbard on the power of thought and the human being began helping each person to spread a smile. Dianetics immediately became a bestseller at the New York Times. It contained unforeseen discoveries, and has remained a bestseller for more than 60 years. There are more than 22 million copies in the hands of the public, and has generated a movement that spans over 100 nations. It’s indisputably the most widely read and influential book ever written about the human mind. It covers the “anatomy and full description” of the reactive mind, the source of nightmares, unreasonable fears, upsets and insecurities which enslave citizens from all nations. Reportedly, this book shows you how to get rid of it, and so achieve something men and women have previously only dreamed of: the State of Clear. If you like reading, and want to explore your own boundaries, this is book Scientologists would recommend you more than any other.

In celebration of this 71st anniversary of Dianetics, the Fundacion para la Mejora de la Vida, and the European Office of the Church of Scientology for Public Affairs and Human Rights, located in Brussels, are organizing showings of introductory videos for people who want to either help themselves, their families, friends or society at large.

Ivan Arjona
European Office of the Church of Scientology
email us here
Visit us on social media:
Facebook
Twitter
LinkedIn