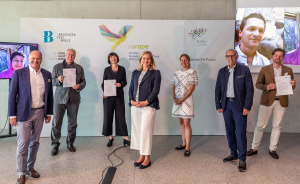 Awardees of the European Culture Prize including Dr. Azza Karam on Screen

NEW YORK, NEW YORK, UNITED STATES, July 30, 2021 /EINPresswire.com/ — The city of Lindau, the Bregenz Festival, the Boswiler Summer and the international organization Religions for Peace will be awarded the European Culture Prize, announced by the Pro Europa Cultural Foundation based in Basel on Friday, 30 July in Lindau. The festive award ceremony of the European Culture Prize will take place in October.

In the past, artists such as the Berliner Philharmoniker, Jonas Kaufmann, Kurt Masur, Armin Müller-Stahl, Iris Berben and Anne-Sophie Mutter have received the award, but also personalities such as Michail Gorbatschow, Hans-Dietrich Genscher and Queen Silvia of Sweden.

“The European Cultural Foundation Pro Europa honors the remarkable activities in the area around Lake Constance, which have received a special boost in recent years, with three of its awards” said Tilo Braune, President of the European Cultural Foundation when the award winners were announced in Lindau. “Both the city of Lindau with its highly active cultural office, the Bregenz Festival, which has especially committed to cultural and musical education programs for young people, and the Boswil Summer, which has brought young talents and world stars together through music during the 20 years of its existence, have deserved outstanding recognition.

As one of the awardees, Religions for Peace has been committed to universal responsibility for peace for decades and has placed the interweaving of global well-being and multilateral international understanding at the core center of its work in a very unique way, ” explained the President of the Foundation.

The laureates learned about the award with great joy: The Secretary General of Religions for Peace, Prof. Azza Karam, sent a message of greetings from New York: “Religions for Peace is grateful for this gracious and prestigious gift of acknowledgement. This award honours a mission of over half a century which is even more powerfully relevant today: when faiths (institutions, leaders, communities, individuals) work together for the common good, our universe will be at peace”