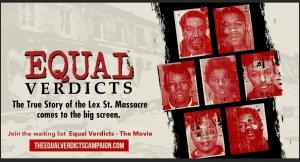 It was one of the most compelling and tragic stories I’ve ever encountered and I felt obligated to share it with the world.”
— Antonne M. Jones

Best-selling author Antonne M. Jones is adapting his nationally recognized novel into a timely movie depicting the underbelly of society. In Equal Verdicts: The True Story of the Lex Street Massacre Jones exposes the motives behind the railroading of 4 innocent men. This September, Tasker and Morris Entertainment launches a socially relevant crowdfunding campaign on Indiegogo to grow the narrative around social injustice, systemic racism, and the disparities of our judicial system.

The South Philly native felt compelled to tell this true crime story in a time when America is airing its dirty laundry. This story some two decades in the making chronicles the lives of the 4 wrongly accused men who spent 18 months on death row for a crime they did not commit. In Equal Verdicts: The True Story of the Lex Street Massacre moviegoers will see what drives misguided law enforcement and an ambitious prosecutor to come to the wrong conclusion, forever changing 4 lives.

Interested backers who log on to TheEqualVerdictsCampaign.com have the chance to be a part of cinematic history by bringing the massacre and the fallout to the big screen. The movie picturized from the bestselling novel is set to film in early 2022 on location in South Philly and South Jersey. The buzz around the film is nearing a fever pitch with the addition of a powerhouse in the industry, seasoned editor and director Victor Hogan III joins the team.

Jones and the groundswell of investors think the time for this story has come. The gruesome event gained national attention going down in the annals of history as one of the most horrific crimes leaving 10 people shot execution-style. With the support of the community, this project will uncover not just the events surrounding that dreadful day but examine the greater theme of racial injustice that permeates America.

For more information about the Lex Street Massacre, to join the crowdfunding or to interview best-selling author Antonne M. Jones contact him at Antonnej1@gmail.com or 856 360 5955.