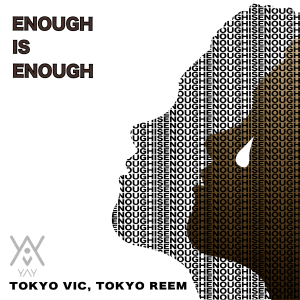 It was May 25th, 2020 when George Floyd was murdered in Minneapolis, Minnesota. The whole world watched, horrified as police officers killed him. Even though only one of George Floyd’s killers has been convicted, tragically not much has changed. Perfectly capturing the frustration, anger, and energy that we’re all feeling, “Enough Is Enough” is a social injustice anthem as well as a call to action!

“Enough Is Enough” is the first single from Tokyo Vic x Tokyo Reem from the upcoming project, Tokyo Vic Presents Story of the People, an album in three chapters. Although they come from very different backgrounds, these two brothers collaborated to create a song that is destined to become a conscious, hip-hop classic.

Tokyo Reem, an international, multilingual MC has lived and traveled all over the world. Currently based out of Harlem, New York, his lyrics sum up the outrage of this past year and the exhaustion of historical trauma and systemic racism. “I’m NOT OK, another Black man died, been on my mind all-day…until freedom, no justice, no peace, is the only approach.”

Produced by Tokyo Vic for Yay Power Music, Tokyo Vic has also criss-crossed the globe a few times, creating hits and working with some of the biggest names in multiple music genres (2Pac, Janet Jackson, Snoop Dogg, Ice-T, B2K, YAY, YG Family). Collaborating with each other across continents, these two have joined together to create a timeless, universal message.

So if you also feel like “Enough Is Enough” (TW: police, violence) stand up, speak out, show your support.