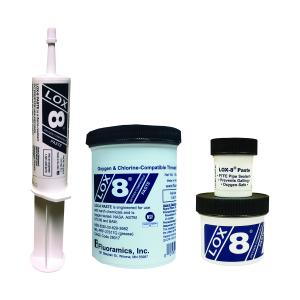 Now I use LOX-8 wherever I can. I recommend this product to anyone who uses an oxidizing chemical that is finding its way through threaded joints.”
— Water Treatment Facility Operations Leader

WINONA, MN, UNITED STATES, May 26, 2021 /EINPresswire.com/ — Sodium Hypochlorite leaks is a problem every water treatment facility experiences. Recently, an experienced Operations Leader at an East Coast Water Treatment Facility was frustrated by the ongoing challenges that sodium hypochlorite presented to his operations team. He turned to Fluoramics to solve his problem.

“Needless to say, these leaks were very disruptive to our operations,” says the leader. “When we discovered a hypochlorite leak, my team had to stop whatever else we were doing and address the problem. We would shut down the sodium hypochlorite system, disassemble and clean the joint, wrap new tape around the threads and reconnect everything. And this was happening all the time.”

The Operations Leader first considered using Permatex thread sealant, but the manufacturer indicated that they did not recommend its use on sodium hypochlorite lines. He next did a search on YouTube and stumbled upon a video for LOX-8® Paste, a thread sealant and lubricant that is engineered to stand up to extreme acids and powerful oxidizers.

“When I saw that video, I immediately thought this could be the solution I was looking for,” says the leader. “I called Fluoramics, the manufacturer of LOX-8, and told them about the leaks we were experiencing. They indicated that they had quite a few water treatment customers, and they were confident LOX-8 would stand up to sodium hypochlorite. I ordered a few jars and some of their tape and followed the video instructions that describe how to first apply the tape and then apply LOX-8 Paste over the tape before reconnecting the threads. That was more than 18 months ago, and we haven’t had a single leak on those lines.

“A few months ago, a leak formed on our sodium hydroxide line, and LOX-8 stopped that too. Now I use LOX-8 wherever I can. I recommend this product to anyone who uses an oxidizing chemical that is finding its way through threaded joints. It was huge for us to solve our sodium hypochlorite problem because for a couple of years I was banging my head against the wall just trying to get it under control.

Fluoramics, Inc. is a leading manufacturer of sealants, greases, lubricants and rust inhibitors, all of which are engineered PTFE solutions. Founded in 1967, the company is based in Winona, Minnesota, and proudly manufactures all of its products in the United States. To learn more about Fluoramics’ products, please visit the company’s website at www.fluoramics.com.