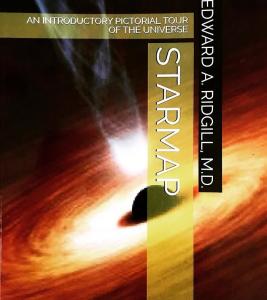 The book is designed for students, children, and inquisitive casual readers to learn more about the universe.

Born and raised in south-central Los Angeles, Edward Alan Ridgill is a retired internal medicine and urgent care doctor, practicing for 40 years. Dr.Ridgill studied microbiology at the University of Washington in Seattle and went on to attain a medical degree from Creighton University in Omaha, Nebraska in 1978. Dr. Ridgill continued on to complete an internship in internal medicine at Creighton before moving on to complete a residency in internal medicine at King/Drew medical center in South Central Los Angeles in 1981. From there, Ridgill was appointed to the position of medical director of the department of physical medicine and rehabilitation at White Memorial medical Center, in Los Angeles that same year.

In late 2020, Edward Alan Ridgill M.D. released a brand-new book on his forever passion, Starmap: An Introductory Pictorial Tour of the Universe. Starmap is an introductory pictorial guide of the universe, containing vivid NASA images, diagrams, and depictions of the cosmos with easy-to-understand explanations and descriptions. The book contains full-page pictures, making it the ultimate coffee table book and virtual learning resource.

“From a very early age, I wanted to be an astronaut and had many interests in the areas of astronomy and science,” says Dr. Ridgill. “My interest in science, astronomy, and microscopy led me to major in microbiology at the University of Washington. The field of microbiology permitted me to work with powerful microscopes whose immense magnification power allowed me to look inwardly at bacteria, protozoa and cells. I also studied viruses with electron microscopes. The incredible magnification required for this study drew me to telescopes and astronomy since a telescope is simply a microscope pointed to the heavens.

When writing Starmap, Dr. Ridgill designed it specifically for students and inquisitive casual readers to provide a non-technical perspective on the solar system. Through his book, Dr. Ridgill hopes readers will develop an appreciation about the unimaginable size of the universe and humanity’s place within it.

Starmap: An Introductory Pictorial Tour of the Universe can be purchased on Amazon in both paperback and Kindle format. Readers can also visit Dr. Ridgill’s Instagram page @edridgill.

Edward Alan Ridgill M.D. is a retired internal medicine practitioner from Los Angeles. Having practiced medicine for 40 years and since retired, Dr. Ridgill has been working tirelessly to research, compile, publish and share the wonders of the universe.