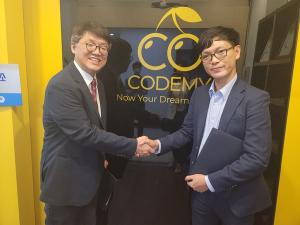 CEO Hwang said, “We have taken a powerful step towards the second stage of developing Codemy.”

On August 6th, Codemy, which had recruited a future education expert and head of Gugguro Media Institute Byung Kee Park as a Co-CEO, spurred the development of the Solana-based coin, its NFT (non-fungible token) and educational metaverse through a technical partnership with Coconut. Codemy plans to equip its platform with an educational metaverse and NFT by the end of this year.

After signing the contract with Coconut on August 24th, Jung-hyeon Hwang, who founded Codemy in 2018 with the intent of operating the first-generation educational blockchain platform, said, “I am grateful that Codemy will be reborn based on Solana-based technology to give people in underdeveloped countries a more solid hope for their future. I hope that more developers will unite with Codemy to create a company that moves beyond the impact of Solana, an emergent blockchain platform over recent years.”

CEO Hwang added, “We have been preparing for a blockchain platform for the past three years, and by signing a contract with Coconut and with a future education expert like Mr. Park as a co-CEO, we have taken a powerful step towards the second stage of developing Codemy.”

Ho-Jun Jung, CEO of Coconut, who has already been developing Solana-based coins since last August, spoke highly of Solana.

“The transmission speed and processing speed are much better than Ethereum coins. Security is also good, and it is expected to be popular in Korea soon.” he said.

Regarding the metaverse, he said, “A specific person can purchase and watch a lecture on the metaverse that has obtained rights through NFT.” In addition, Mr. Jung has prior experience developing a banking system with government agencies and has a dreaming technology. “If you do not have a bank account and use the NFC function, it will be a beneficial technology in especially underdeveloped countries where the banking system is not well established.”

When Codemy reaches a user base of over 10 million members, Codemy Cash can be developed to enable its use on a blockchain-based shopping mall without a third-party card. Mr. Jung aspires to contribute to a world where Codemy Cash, not coins, can be used without a bank account.

According to Co-CEO Byung Kee Park, the vision of Codemy is to make Codemy a unicorn company and to contribute to creating a balanced world through educational platform, educational services, and coin rewards to underdeveloped and developing countries. Mr. Park, a future education expert, said, “The motto of Codemy is ‘If you become a friend of Codemy, your dreams will come true.’ We developed this more recently and added the catchphrase ‘Earning while learning, Learning while earning’. I want to make the platform a ‘playground’ of educators and learners.”

Mr. Hwang, the founder of Codemy, said, “I heard from my acquaintances that the educational environment in the third world was poor and experienced it for myself in the field. We decided to create a blockchain system and have been preparing for this platform for three years until now.”

Codemy with its newly-launched Codemy coin powered by Solana technology, is taking innovative steps such as reopening the platform in early November and raising the rewards of e-cosystem users 50% of the total number of coins.

Codemy is preparing to be listed on a domestic exchange by this year, and it is known that it plans to promote listing on a large US cryptocurrency exchange in early 2022.