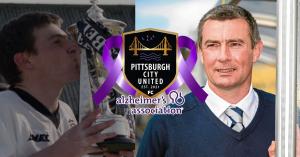 I’m looking forward to the challenge and intricacies of leading Pittsburgh City United FC into their inaugural season and also building foundations on and off the pitch.”
— Barry Smith

Pittsburgh City United FC has officially announced the signing of former Dundee FC Manager and Hall of Fame player Barry Smith as their new head coach going into the 2021 UPSL Fall season. Barry Smith will begin managerial duties with the team upon arrival, which is expected before the start of the UPSL Fall season.

Pittsburgh City United FC is the first U.S. soccer team to partner with the Alzheimer’s Association in an effort to promote a new approach to raising charitable funds and awareness in the world of football. The team has agreed to donate 50% of all profits from ticket sales and merchandise to the Alzheimer’s Association as well as commit a minimum of four hours of community service per player, coach and executive staff member each Fall and Spring Season.

The team will also require all players to wear protective head gear for their games, which Full90 has agreed to provide in an effort to spread awareness of the need of stronger safety measures when it comes to head trauma in soccer.

“It’s an honor to become Head Coach of this unique new franchise Pittsburgh City United FC. After speaking to the owner Mr. Monsour and seeing his enthusiasm and professionalism, not only for football, but also to promote Alzheimer’s Awareness, I knew it was a project I wanted to be involved in. I’m looking forward to the challenge and intricacies of leading Pittsburgh City United FC into their inaugural season and also building foundations on and off the pitch” -Barry Smith

“ Coach Smith’s decision to join our team reflects the overwhelming support we have received since announcing our presence in the United Premier Soccer League just six weeks ago. Our foundational objective of being more than a team, but rather a representative of support for all healthcare workers and families who continue to face the harsh realities associated with this terrible disease has taken flight faster than we could have ever hoped for. Coach Smith has not only honored us, but the entire world of football, with this selfless decision to join Pittsburgh City United in our quest to be the healthcare worker’s champion not only on the field, but in our healthcare community.” -Michael Anton Monsour

Barry Smith (born 19 February 1974 in Paisley) is a Scottish football player and coach. Smith played in the right back, centre back, and defensive midfielder roles for Celtic, Dundee, Valur, Partick Thistle, Greenock Morton and Brechin City. Smith was admitted into Dundee’s Hall of Fame having made 400 appearances for the club leading Dundee FC to a Division Championship and a Scottish Cup Final as Captain. He became Dundee first team manager in October 2010. During this period, Smith led the team to a club record 23-game unbeaten streak in the league and promotion into the Scottish Premiership. He has since managed Alloa Athletic, Aldershot Town, East Fife, Raith Rovers and Brechin City compiling a record of 115 wins 70 draws over 318 games.

Full90 Sports LLC is recognized in the soccer community as the company that brought attention to the issue of concussions; and is the leader in protective headgear for soccer players worldwide .

According to a study in the British Journal of Sports Medicine titled, “ The Effectiveness of Protective Headgear in Reducing Concussions and Head Injuries in Adolescent Soccer Players,” players NOT wearing Full90 headgear during the study experienced 2.7 times as many concussion symptoms than those who wore the headgear.