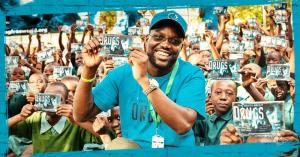 Giselle Foundation founder Barry Paul is dedicated to ending drug abuse and addiction in his native Kenya and beyond.

KISUMU, KENYA, July 15, 2021 /EINPresswire.com/ — For Giselle Foundation and its founder Barry Paul, this year’s United Nations Office on Drugs and Crime motto, “Share Facts On Drugs, Save Lives,” is a way of life. Paul believes educating youth on the truth about drugs is also the key to the future, because youth are the most precious asset of a nation.

“So many families have been destroyed by drugs in the slums,” says Paul in an episode of “Voices for Humanity” on the Scientology Network.

Paul grew up in the slums of Kisumu, Kenya, which were inundated with drugs, crime and violence. Catastrophe was a common occurrence in his life growing up. His turning point came when two of his closest friends were shot and bled to death in a drug-fueled political riot—a fate he only narrowly escaped. Paul realized he had to radically change his own dead-end life.

He founded Giselle Foundation with a mission to better society through education. And in partnership with Foundation for a Drug-Free World, he and his volunteers are committed to the vision of a sustained, healthy, empowered and vibrant society free from drugs.

“Voices for Humanity” is a Scientology Network series that features changemakers of all faiths, cultures and nationalities who extend help to their communities through Scientology-sponsored humanitarian programs.

The Scientology Network launched in March 2018. Since then, it has been viewed in 240 countries and territories worldwide in 17 languages. Satisfying the curiosity of people about Scientology, the network takes viewers across six continents, spotlighting the everyday lives of Scientologists, showing the Church as a global organization, and presenting its social betterment programs that have touched the lives of millions worldwide. The network also showcases documentaries by independent filmmakers who represent a cross section of cultures and faiths, but share a common purpose of uplifting communities.

Broadcast from Scientology Media Productions, the Church’s global media center in Los Angeles, the Scientology Network can be streamed at www.Scientology.tv and is available through satellite television, mobile apps and via the Roku, Amazon Fire and Apple TV platforms.