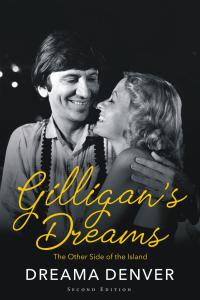 This is the journey of two imperfect people who fit perfectly together. Being loved by this man was the greatest gift of my life!”
— Award-winning author Dreama “Mrs. Gilligan” Denver

PRINCETON, WEST VIRGINIA, UNITED STATES, May 4, 2021 /EINPresswire.com/ — The iconic television series “Gilligan’s Island” is shown somewhere in the world every hour of every day. Amazingly, the most famous “3 Hour Tour” in TV history is still sailing over 50 years later. New generations of fans are discovering the castaways and the show’s namesake Gilligan, a role that made star Bob Denver a television icon.

“I was married for nearly 30 years to the man the rest of the world knew as “Gilligan,” recalls Dreama Denver, author of the touching and award-winning memoir “Gilligan’s Dreams; The Other Side of the Island” from publisher Headline Books.

“This is the journey of two imperfect people who fit perfectly together,” says Dreama. “Losing Bob was the most difficult thing I’ve ever faced, but his love left me stronger, more focused, and in the end, able to survive even when I thought I couldn’t. Being loved by this man was the greatest gift of my life!”

After the young up-and-coming starlet was cast as Bob Denver’s love interest in a theater production of Woody Allen’s “Play It Again, Sam”, real sparks flew, leading to a whirlwind Hollywood romance, a Las Vegas wedding and a long successful North American theater tour with Bob. It all came to a halt when Dreama left her rising show business career to care full-time for the couple’s infant son Colin, who was diagnosed with autism at 2 years of age. Bob Denver also soon said goodbye to his television career to be a full-time stay-at-home dad for Colin, who required 24-hour around-the-clock care. In doing so, the man millions around the world knew as the happy-go-lucky Gilligan walked away from the fame and fortune of Hollywood to play the greatest role of his life, devoted husband and father. Bob Denver passed away in 2005.

Dreama Denver now heads The Denver Foundation, helping families of other special needs children, and supporting veteran’s causes. She keeps in touch with Bob’s many loyal fans through www.bobdenver.com, and oversees “Little Buddy Radio”, an FM and online non-profit radio station owned and operated by the foundation heard around the globe on the “Tune-In” app and Amazon Alexa devices worldwide. Dreama is also the multiple award-winning children’s book author of “Four Bears In A Box” written for their autistic son Colin. She often appears at book signings and celebrity autograph and memorabilia shows, helping keep Bob’s legacy and memory alive.

In “Gilligan’s Dreams-The Other Side Of The Island”, you’ll read the poignant, loving, revealing, inside account of the private lives of Bob and Dreama Denver, including:

-Dreama’s big break as one of the original Walt Disney World cast members, and the sage advice that Roy Disney gave her
-Her first reaction when she was cast opposite “Gilligan’ and was told she’d have to kiss him in a romantic scene
-Bob’s long battle with alcohol that nearly ended their relationship before it got started
-Dreama and Bob’s age difference and how despite it, they beat the Hollywood relationship odds with a loving three-decade marriage
-Bob and Dreama’s globetrotting lifestyle, living on the beaches of Hawaii, in the mountains of Colorado, by the bright lights of Las Vegas, along the California coast and more before settling in…small-town West Virginia?
-How Dreama and Bob first reacted to the news of their son’s autism, the lack of treatment options for it in the 1980’s and how caring for Colin changed both of their lives forever
-Bob and Dreama’s visits to The White House, CBS Television’s 50th-anniversary celebration, Gilligan’s Island being honored at The TV Land Awards and more celebrity moments
– Whether Bob ever resented being typecast as Gilligan, the many variations of the Gilligan’s Island theme on failed TV shows (Gilligan out west! Gilligan in space!) and what similarities and differences there were between the real Bob Denver and his portrayal of the classic castaway
-Bob’s other major TV triumph as “Maynard” on “The Many Loves of Dobie Gillis” and how many older fans identify with Bob’s classic beatnik character on his first hit show
-Dreama’s long and close friendship with Dawn Wells, who passed away in 2020 (they often appeared together as “Mary Ann and Mrs. Gilligan”)
-Bob’s brave final days, and how Dreama literally had a heart attack caused by the stress of losing her husband
-How Dreama feels about the long-rumored Gilligan’s Island movie, the planned Bob Denver Museum in his adopted hometown of Princeton, WV and what she’s most proud of in carrying Bob’s legacy forward

Growing up in small-town USA in the 1960’s, Dreama never imagined her fantasy of becoming an actress would ultimately become reality and land her in the arms of a man with one of the most recognizable faces on the planet. In the pages of “Gilligan’s Dreams-The Other Side Of The Island”, you’ll find love, laughter and tears. Inspirational and possibly even life-changing, “Gilligan’s Dreams” is Dreama Denver’s love letter to Bob and her gift to Bob’s fans. In detailing their Hollywood years, their journey through autism with their son Colin and Bob’s courage during the last months of his life, Dreama allows Bob’s fans a personal glimpse of the real man behind the iconic television characters he created.

As an actress, Dreama Denver starred in dozens of theatrical productions opposite stars of the day including Sal Mineo, Gale Gordon, and Doug McClure, co-starred alongside Bob Denver in several well-received theatrical productions, had a co-starring role in the TV movie “The Harlem Globetrotters on Gilligan’s Island” and in the NBC TV pilot “Scamps” produced by Sherwood Schwartz (Gilligan’s Island, The Brady Bunch) starring Bob Denver and Joey Lawrence.

Today, as an award-winning author, media personality, philanthropist, and speaker, Dreama keeps Bob’s legacy alive via her work with The Denver Foundation, which supports special needs children and veterans as president of Always Free Honor Flight, and services on the board of directors of the Princeton Renaissance Theater, the future home of the Bob Denver Museum.