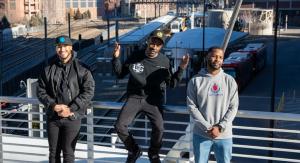 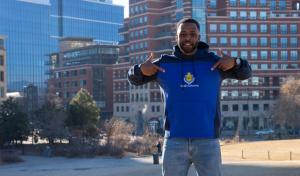 USA, February 18, 2021 /EINPresswire.com/ — Around 2005, Justin Johnson — at the time a football player for Temple University in Philadelphia — was looking for an outlet while recovering from a broken fibula and dislocated ankle. Fortunately, the school had a tech center with a music room and a recording studio, and Johnson turned to producing music.

“I started going there when I was going through rehab for football,” he recalls. “I learned how to make beats on different software and would get coached by some students. Making melodies at Temple was the starting point that made me realize how much I truly love music, sounds and the vibes.”

After graduating and playing arena football for a time overseas and in the U.S., Johnson returned to his hometown of Denver and formed Dream Is Grind, LLC, an artist management company. In addition to making his own music, he wanted to foster local talent through artist development, logo design, web design, marketing strategies, songwriting, event planning, photography, video production and more.

For inspiration, he looked to Vanzil Burke, a manager and producer he’d met while playing football in L.A.

“I witnessed how [Burke] managed an artist and produced shows, and I felt like I had a bigger impact working with people rather than [trying] to do something independently,” Johnson explains. “He’s in the big leagues now, and it’s inspiring to see his productions continue to thrive year over year. I’m still working on my artistry, but ultimately it’s the team aspect that drives me to work harder, and it’s more meaningful to be able to share similar dreams and goals.”

Instead of launching in a major entertainment hub like Los Angeles or New York, Johnson was drawn to Denver because there was so much undiscovered talent here. “Denver is my home, with a lot of talent and potential,” he says. “One of my goals has always been to try to put Denver on the map for entertainment instead of [being] a flyover city.”

The name Dream Is Grind symbolizes the struggles artists experience while reaching for their goals.

“I decided on Dream Is Grind because I felt like it represented pushing hard toward your dream,” Johnson says. “If you have dreams or goals, you have to grind hard to get [them]. I live by that motto, because hard work and dreams don’t come easy. I love the name, because it influences people to be a better version of themselves.”

Johnson champions a variety of music, from hip-hop to R&B to pop. He’s worked with artists including Annabelle, Jay Triiiple, Chy Reco, KDJ Above and more. One of his current artists is rapper Taurean Nelson, who joined the agency in 2018.

“Justin has been one of the most solid people in my corner,” Nelson says. “We just immediately clicked, and it felt right. We stand on a lot of the same morals, so most times we see things similarly.”

In addition to dropping his album Houdini in 2020, one of Nelson’s memorable gigs was headlining a show in Los Angeles for Jakob Campbell, a Colorado artist who competed on the hip-hop reality show Rhythm & Flow on Netflix in 2019.

“I actually got that opportunity due to a prior performance I had out in North Hollywood just months prior,” Nelson says. “I performed at a show I got through a friend of mine here who plugged me to a promoter out there. The promoter and fans in the venue liked me so much he pulled me to the side, and a week later, I’m getting a call about headlining my own show for October 2019.

“Headlining my very own show in L.A. — I’m just a kid from Colorado, and getting love in L.A. was literally a crazy experience,” he adds. “It’s very hard work to put on a successful show in your hometown. It’s ten times harder trying to in a place where you’re pretty much a stranger.”

Nelson wants to get back to making music and dabbling in other projects in 2021.

“I want to release a lot of new music and visuals this year,” he explains. “I’m starting this year with a new seven-song EP titled R1$3 (Respect, Power and Money Is Everything). We’ll be dropping the first single very soon. Keith Komedy and I are about to start writing a comedy show, and I would like to tap more into writing scripts and directing, as well.”

Komedy joined Dream Is Grind in 2018. He started out as a host for the company’s Kush Groove concert series, showcasing the musical talents of local artists. He soon became Johnson’s business partner and executive producer for Dream Is Grind.

“Justin has been the ultimate teammate,” Komedy says. “He takes action in what he believes in while allowing me to have input that is actually implemented into action.”

“A few of my friends would always say, ‘Keith, you should do comedy,’” he explains. “So I gave it a try and fell in love, and came up with the name Keith Komedy as a reminder to keep going with what I love doing most, which is making people genuinely laugh. I’ve performed at the [Denver] Improv and other local venues around the city.”

Johnson says Komedy, Taurean and other members of the Dream Is Grind family are easy to mesh with because they share similar goals.

“We can bounce ideas off of each other and implement them quickly,” Johnson explains. “They usually turn out the way we envision them. We hold each other accountable, and we don’t miss a beat while taking care of our families.

“We inspire each other and push each other out of our comfort zones,” he continues. “It’s rewarding to work with others that believe in your dream or idea. It’s also rewarding to build a social network of accomplished people.”

Along with client events, Dream Is Grind had to cancel Kush Groove, which would have taken place in Denver, Portland and Miami, because of the pandemic; concerts and client bookings are on hold through 2022.

“I think that our clients truly believe in us,” Johnson says, “and we have developed solid relationships with them to keep us booked when COVID restrictions lift.”

Johnson, Taurean and Komedy always thought about pushing their efforts to film and video. They turned the Kush Groove series into a YouTube show called Kush Groove TV, which merges a documentary format with reality TV, highlighting real people without following a script.

Their first episode spotlights local artist Sydnie Battie, who describes her music and experience participating in the movement for Black lives and last year’s protests against police violence, where she was hit with a rubber bullet.

“For 2021, we plan to release several episodes with different content for each episode,” says Johnson. “Not every episode will be related to music.”

“The line basically got started for our concerts,” Johnson says. “I wanted our team to stand out with branded clothing from Dream Is Grind and Kush Groove. From there, a lot of people reached out on how they could get a hat or shirt. Keith and I worked on making items readily available online for purchases back in the fall of 2020.”

Johnson has many pinnacles for Dream Is Grind to reach by the end of the year.

“The goal is to become a nationally recognized production company as well as [gain] huge exposure for Taurean,” Johnson says. “By the end of 2021, we want to work or have future work locked in place with several high-profile artists and businesses. We want to be able to feel accomplished with the quality of work we put out for the year, and in doing that, we want to continue to bring attention to what Colorado has to offer.”

Visit the Dream Is Grind website to learn more.