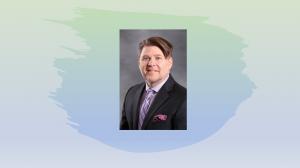 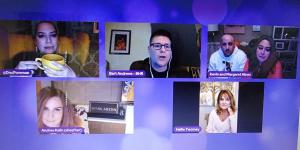 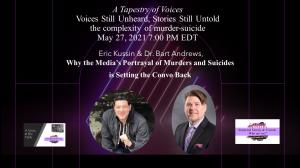 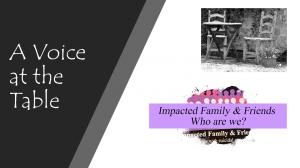 Why the media’s portrayal of murders and suicides is setting the convo back.

TAUNTON, MASSACHUSETTS, UNITED STATES, May 26, 2021 /EINPresswire.com/ — During an event debriefing in November 2020 for suicide loss survivors, a question was asked about “safe messaging.” Specifically, who decides what an attempt survivor, loss survivor or impacted family member can or should or should not share as part of their personal story? Within two weeks the stage was set to bring several influencing voices to the table and have that conversation on a livestream. The topic and the wide-open platform on a January 22nd livestream were groundbreaking.

Dr. Bart Andrews was joined at the virtual table by host Annemarie Matulis, A Voice at the Table, Inc., moderator Dr. April Foreman and participants Kevin and Margaret Hines, Hallie Twomey, a suicide loss survivor whose story is told in the award-winning documentary, “Scattering CJ” and, Andrea Kalin, producer and director of “Scattering CJ.”

Another very complicated, difficult, and ground breaking conversation is “The Complexity of Murder-Suicide.” And again the topic evolved from a simple discussion of “can we do this?” in February to an 8-part digital series that launched May 6th. Dr. Andrews, a nationally recognized expert within suicide prevention, will bring his voice and lived experience to the table in the 4th session of the series via a livestream with Eric Kussin, a well-known professional sports executive and mental health advocate and activist.

Here is the YouTube livestream link to “Why the Media’s Portrayal of Murders and Suicides is Setting the Convo Back”: https://www.youtube.com/watch?v=1VKeQCH9vhk.

In preparation for the livestream, Dr. Andrews noted that, “Contrary to popular belief, especially from those who promote the use of involuntary treatment as a means to prevent violence, murder-suicide is a primarily a cultural issue, not a mental health issue. There are many cultures that have similar rates of mental illness but do not have near the number of mass murders or murder-suicides. If mental illness was the culprit, we would expect similar incidents across cultures. We do not observe similar levels of this behavior across cultures. America has both a gun problem and an over idealized emphasis on individuality and success. Americans believe success and failure are dispositional in nature, not systemic. High accessibility to firearms combined with large levels of a “culture of honor” drive our murder-suicide rate.”

Dr. Andrews has over 25 years of experience providing behavioral health services. He received his Bachelor of Arts degree from the University of Missouri-St. Louis and his M.A. and Ph.D. from Southern Illinois University. He is actively involved in raising community awareness about the risk of suicide and training community members, law enforcement and other professionals in suicide assessment and intervention.

This series is produced by A Voice at the Table, Inc. a grassroots movement for families and close friend emotionally impacted and traumatized by the suicidal experiences of their loved ones. http://www.avoiceatthetable.org/index.html
For the Media: Responsible reporting on suicide, including stories of hope and resilience, can prevent more suicides. Please visit the Suicide Reporting Recommendations for more information. For additional information, please visit SuicideReportingToolkit.com.
About A Voice at the Table: A Voice at the Table was founded in 2014 as a companion to the documentary, A Voice at the Table, a call to action to bring the lived experience voices of suicide attempt survivors to all tables within suicide prevention, intervention and postvention. As a grassroots movement, it has since expanded and become the national “home base” forum for the family & friends emotionally impacted & traumatized by the suicidal experiences of loved ones. A movement: a group of people working together to advance their shared ideas. A forum: a place, meeting or medium where ideas and views on a particular concern can be exchanged, in this case, nationally and internationally. For more information: director@avoiceatthetable.org

Annemarie Matulis
A Voice at the Table
director@avoiceatthetable.org