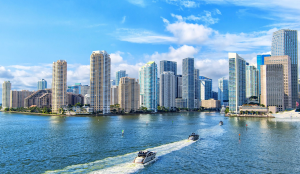 Downtown Miami is attracting powerhouses in the tech, financial and diamond industries

With help from Miami Mayor Francis Suarez, downtown Miami is attracting powerhouse players in the tech, financial and diamond industries

MIAMI , FLORIDA, US, June 2, 2021 /EINPresswire.com/ — Leaving 2020 behind, downtown Miami is flourishing. With companies worldwide announcing plans to make Miami their growth strategy launchpad, the Magic City is on the rise.

The speedy comeback may have been unexpected, but Miami has turned adversity into an opportunity for decades. After Hurricane Andrew, Miamians resourcefully came together to rebuild the city and local economy. When the city became ground zero for the 2008 foreclosure crisis, it quickly rebounded, attracting condo buyers from all over the world.

The repositioning of downtown Miami has been in the making for several years. For example, financial institutions have been descending downtown in the last few years, a trend that is gaining steam. A study commissioned by the Miami Downtown Development Authority shows the number of registered investment advisers located in the city’s urban core climbed 35% between 2018 and 2020. Total assets under management in the district more than doubled to $152.4 billion, as recently reported by the Miami Herald.

Miami City Mayor Francis Suarez has been working overtime to entice tech companies to ditch Silicon Valley for the Magic City. Tech companies and financial institutions are reacting positively to his efforts.

In January, SoftBank Group International announced a $100 million funding commitment to help support and build the tech ecosystem in Miami. Adding fuel to the economy, Softbank will provide capital to local startups and relocating businesses.
Miami is getting a great deal of attention, and for a good reason, according to SoftBank’s CEO Marcelo Claure.

“Miami Dade has a diverse talent pool and is a natural bridge to (Latin America), with close proximity to markets in Central and South America as well as the Caribbean,” Claure wrote on a LinkedIn post. “It’s one of the busiest ports in the United States, and Miami International Airport is the top arriving point for cargo flights from Latin America. With our Latin America fund, it’s clear that this is something we’re passionate about at SoftBank. It’s an attractive market that offers unique opportunities for immigrants and minorities to pursue entrepreneurship opportunities.”

There are many examples of US-based corporations benefiting from Miami’s welcoming business environment, expanding or opening in its urban core. Some of them include Blackstone, a top New York-based global investment business, is investing capital on behalf of pension funds, large institutions and individuals; Thoma Bravo, a private equity firm with over $76 billion in assets under management; and North Equity, a venture equity firm that builds, cultivates and scales transformative digital media brands. Microsoft and Apple are currently scouting Miami’s urban core for an office.

Similarly, global businesses are entering the US market with Downtown Miami as their catalyst.

Istanbul-based Markaled recently signed a lease in downtown Miami to open its first US location. The luxury jewelry store will occupy space at the Time Century Jewelry Center in the heart of Miami’s diamond and jewelry district. Scheduled to open in mid-2022, Time Century will be the district’s first luxury diamond and jewelry center in decades. After completing a $50 million renovation of the former Metro Mall building, Time Century will transform a vital corner in Miami’s historic downtown.

Developer Yair Levy, the visionary behind Time Century, recently moved to Miami from New York to play a more active role in the evolution of downtown.

“One day, we are going to look back and see how pivotal 2021 was for the transformation of downtown Miami,” said Levy, who heads New York-based Time Century Holdings. “Many of us are fortunate to have gotten here early enough in the process to leave our footprint on what is becoming a world-destination for residents and businesses. Our diamond and jewelry center will have four floors of luxury jewelry retail and wholesale space as well as four additional floors of offices to accommodate Miami’s growth. This project was designed by renowned architect Kobi Karp to elevate downtown Miami to the next level.”

While the pandemic has caused a lot of suffering and added uncertainty to the economy, downtown Miami is – once again – rising above the challenges.
“Downtown Miami is on the cusp of a dramatic transformation,” Miami-Dade Commissioner Eileen Higgins recently said. “The community response to the pandemic demonstrated that beyond its commercial spaces, downtown is also a neighborhood filled with residents, families, local restaurants, and arts and culture.”