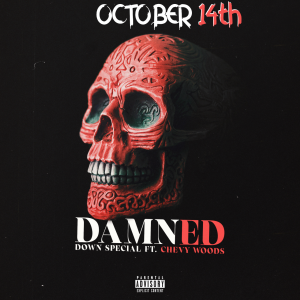 Down Special’s debut single featuring Chevy Woods from Taylor Gang releases on October 14th on all platforms, such as Spotify.

FAIRFAX, VA, USA, September 29, 2021 /EINPresswire.com/ — Available now is a teaser for the song “DAMNED (feat. Chevy Woods),” which releases October 14th. It can be found on YouTube here.

With the opening line as strong as, “I shot my hollow heart upon the sea of the damned,” listeners are immediately greeted with a snapshot into the inner workings of Down Special’s tortured soul. Featuring Chevy Woods (from Taylor Gang, founded by Wiz Khalifa) on vocals, the track is hip-hop to the core, jagged around the edges but laced with emotive prose that details a story about someone who’s lost but all hope.

Tough 808 grooves are juxtaposed against a bed of melancholic chords, providing a solid foundation for Down Special and Chevy to spit their truth. It’s raw, emotive, and packed with his signature bars that will go on to define the Northern Virginia-based artist’s career.

“I’m really just making music that feels right to me. It’s like therapy,” says Down Special. “In fact, I’ve written more songs in the past month than my entire life, I think.” Prior to this release, Down Special has honed his craft by releasing music under a few different aliases, working as an intern at Pilot Creative Services (former management of Benny Blanco, Neon Hitch, etc.), and attending New York University’s Clive Davis Institute of Recorded Music. He wrote, produced, mixed, and mastered the song at home.

The connection to Chevy Woods isn’t a random one. “I attended Duquesne University freshman year. It was when Deal or No Deal by Wiz Khalifa came out. My friends and I all listened to it on repeat; well, and probably most of Pittsburgh! After I learned about Chevy from following Taylor Gang, I really wanted to work with him. I reached out and got lucky. I’m a real fan.”

This is Down Special’s debut release and a sure sign of big things to come. For media inquiries, including interviews and all things press-related, please email downspecial10x@gmail.com.