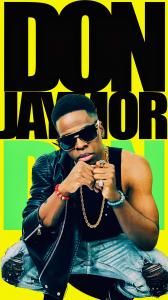 NEW YORK, NEW YORK, UNITED STATES, October 4, 2021 /EINPresswire.com/ — The pandemic and global-wide shutdown was a challenging experience for so many across the globe, including Bronx-native R&B singer-songwriter Don Jaymor. The smooth velvet baritone vocalist and occasional rapper has released his latest album”Misunderstood.”

Since releasing his EP turned deluxe album “Fade” (2018) and 9-track EP album “Fallen Angel” (2019), Jaymor has been quite busy networking with industry tastemakers in support of previous single releases from those albums, while also writing new songs for “Misunderstood.” Much of the inspiration behind this album was due to indignant and unjust feelings built up during the pandemic and movements like ‘Black Lives Matter.’ The relatable tracks have been met with great fanfare.

Rather than solely producing this album himself, Jaymor chose to use beat-making apps like Splash (by PopGun Labs), Groovepad, and Apple Loops to create the music for some of the album’s songs. Collectively delivering a blend of Contemporary R&B, Trap-Soul, Hip- Hop, and Reggae. “Using royalty-free beat apps and loops has been a fun experience for me, I’ve been able to go through the crates and find various sounds that I can put together and create songs swiftly,” he says. Lyrically, Jaymor touches on multiple topics on this album, drawing from introspect and his own personal views of today’s political and cultural issues.

On songs like “Misunderstood” Jaymor sings of unfair treatment and racial profiling, soon visiting subjects relating to life in the streets on “(Stay Out Of) Trouble,” and standing together to fight inequality and the lack of unity in the black community on “Unification.” Jaymor also delivers smooth R&B on songs like “Climax,” which takes a lyrical twist on keeping one’s cool while under intense stress, and the radio-targeted Spring-single release “Know What U Feel.” If you haven’t heard of Don Jaymor before, this album is an intriguing introduction and an earful of an artist with much to say and soul to sing!

Check out “Misunderstood” and connect with Don Jaymor via the links below to stay up to date on his latest releases.

ABOUT
Don Jaymor is an American singer-songwriter, rapper, and record producer. Jaymor was born in the south Bronx of New York City to an African-American mother and Jamaican father. Much of Jaymor’s upbringing had been surrounded with musical influences and various styles of music ranging from R&B, Reggae, Pop, and Hip-Hop/Soul. From collaborations with producers all over the globe, both major and upcoming, to performing in various nightclubs within his hometown of New York City, he is truly an up-and-coming vet! He’s released several chart-topping singles like the upbeat gym-playlist-worthy single “Move Ya Feet,” and the Numberonemusic.com #1 single “All I Wanted,” not to mention highly anticipated albums “Fade,” “Fallen Angel,” and most recently “Misunderstood.” Jaymor’s music has totaled over 3,000,000 downloads, including sales, streams, & spins!