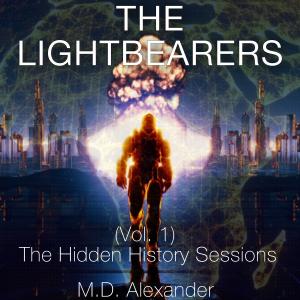 Cover of The LightBearers: The Hidden History Sessions

Published Author M.D. Alexander wrote a book almost 15 years ago that may provide insight to the origins of UFOs officially revealed by the U.S. government.

The answer to this question may be shocking to most readers, if not deniable, even though it has already begun circulating on the internet and select news outlets.”
— M.D. Alexander

ORANGE COUNTY, CA, UNITED STATES, July 12, 2021 /EINPresswire.com/ — No one will ever forget when a sitting United States president (Donald Trump) ordered the Department of Defense, and the U.S. Intelligence community, to publicly reveal any evidence of UFOs. To solidify this amazing moment in history, it will not be omitted that during the Summer of 2021, under a new president (Joe Biden), that an official report was released. This brought forth even more speculation and questions than before its distribution. Are these craft created by one species of aliens? Are they hostile, friendly, or just observing? With so many inquiries, who would’ve guessed that a book written in 2007 may provide answers, and it’s been available to the public for the past 10 years.

In modern times, Unidentified Flying Objects have been reported to no avail. Local, state, and federal governments have publicly denied the legitimacy of those reports causing most people to be deemed as “sci-fi nuts gone wild” or conspiracy theorists. It was easy to dismiss any evidence of those sightings with the lack of “hard evidence” (pictures and videos were written off as fabricated or hard to make out). That was until the invention of smartphones and social media (with live distribution) which changed conversation and made it harder for authorities to keep denying the possible truth of continued sightings. Now that the report is out and world leaders are openly sharing dialogue on the matter, the new point of contention is: If UFOs are plausibly real, where are they coming from. A little known book with the title “The LightBearers: The Hidden History Sessions” may shed some light on this matter.

M.D. Alexander is known as a wellness expert but, growing up and in his early 20’s, he was known for studying everything from world history (with an emphasis on ancient civilizations) to science (with a love for physics). As the son and grandson of members associated with secret societies, he has always been fascinated with ancient and modern mysteries. After reading hundreds of books, joining fringe organizations, and attending lectures on his beloved topics, M.D. appeared to have turned completely in another direction: the streets of Cleveland (Ohio). Things went downhill for him from that point.

Following his indictment and conviction for leading a series of unarmed bank robberies, M.D. was sentenced to a total of 10 years in federal prison. During his time incarcerated, M.D. reflected on his life up to that point, where he went wrong, and the importance of reconnecting himself with the studies he once cherished. In 2007, after contemplating that the information he had amassed over the years would be lost if he died in prison, he instinctively began writing a book. The work was a 290+ page compilation turned story (later broken up into three separate parts) that was dedicated to the next generation in his family. It was a sharing of info to assist them in being aware of what had been, may be, and might be coming.

So what is “The LightBearers: The Hidden History Sessions” about? M.D. spent weeks writing out by hand, then typing, and editing a story that some say is reminiscent of the style used by author Dan Brown (The Da Vinci Code) to share hidden historical themes that are cloaked in a fictional setting. The protagonist of M.D.’s story appears to be patterned after himself (once readers peruse part two, The Book of Kaizen, that theory becomes a lot more realistic). During the course of his adventure, information about history is revealed in ways that most who went to formal Western educational institutions will recognize while other elements will come across as mind-blowing and somewhat theoretical. However, there is a section of the story that delves into the possible origin of the UFOs being debated on now.

Without giving spoilers to the book, and allowing you to judge the information yourself, we suggest that you read it and share your thoughts afterwards.

To learn more about M.D. Alexander’s story and his work, please visit: https://amazon.com/author/mdalexander