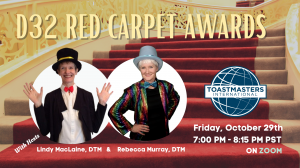 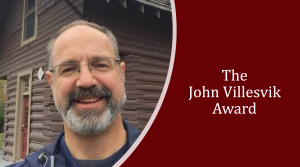 The District’s annual awards celebration showcases both the educational and leadership achievements of hundreds of members”
— Carolyn Curley, DTM, IPDD

Geographically, District 32 comprises 76 clubs and 1100 members in Alaska and the westernmost territory of Washington State. “The District’s annual awards celebration showcases both the educational and leadership achievements of hundreds of members,” said Carolyn Curley, 2020 District Director. The program will honor more than 100 individuals receiving awards for educational, leadership, and service achievements between July 1, 2020, and June 30, 2021.

The international edutainment duo Rebecca P. Murray and Lindy MacLaine will lead the highly produced Broadway musical-themed event. MacLaine placed third in the World Championship of Public Speaking in 2020, during the largest Virtual Convention, where she met a kindred talent in Murray. “We’ve packed the evening full of musical medleys customized to Toastmasters, which will honor recipients in unforgettable style,” said MacLaine.

Although the Pandemic presented membership challenges to the in-person club-centered organization, the District’s secret weapon became the super-power collaboration between Division Directors. “These six individuals demonstrated commitment to their members and led the charge to a highly successful year,” reflected Curley. “As a result, we’ll be unveiling a new achievement called the ‘Star Team Award’ to pay special recognition to their efforts which resulted in a robust District despite member and club losses due to the Pandemic.”

The Star Team Award is not the only award born out of the Pandemic. Last year the John Villesvik Award was created after his untimely passing. Villesvik had been an active member both in front and behind the scenes in District 32. While providing enthusiastic support, he volunteered and encouraged members in his clubs and the District.

A member of Villesvik’s family will pay tribute to John and recognize one Toastmaster for going above and beyond in service to others as John used to do. Last year’s winner was Distinguished Toastmaster and Past District Director Kyle Hall. “I was completely humbled and nearly speechless to be named the first winner of this prestigious award,” said Hall.

Staying true to a Toastmaster motto by founder Ralph C. Smedley, who said that ‘people learn best in moments of enjoyment,’ the awards show will include humor, song, lively dialogue, and sprinkles of inspiration.

The event will attract Toastmasters from around the globe and hopes to host an audience of 150 – 200. “Our goal for the evening is short, sweet, and fun; a one-of-a-kind experience for our attendees,” said Murray, who, in addition to co-hosting is the event’s executive producer. “If we leave ’em all singing and dancing, all the better!”