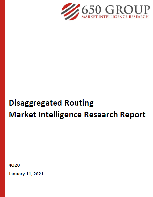 650 Group issues a new report on the Disaggregated Router Market. This market is expected to grow in excess of 50% per year over the next five years.

The development of software-based routing technology that can be sold separately from routing hardware has spawned the Disaggregated Routing market, causing soaring growth.”
— Alan Weckel

INCLINE VILLAGE, Nevada, January 12, 2021 – According to a new report published by 650 Group, titled Disaggregated Router Forecast 2020-2025, the worldwide Disaggregated Router market will exceed $3 Billion in revenue by 2025. The routing market is experiencing a significant shift towards software-based routing, driven initially by architecture changes at cloud hyperscalers, which has driven interest in making the purchase decisions for ASICs, hardware, software, and optics separately.

Routers have been a critical wide area networking technology since the late 1980s. With the advent of the commercial Internet in the mid-1990s, this market saw rapid expansion. About five years after Internet Service Providers adopted router technology, telecom service providers mimicked ISP and began using routing and Internet Protocol architectures as their underlying transport and access systems. As the telecom industry modified its networks, the router market expanded further.

“As Telco SPs become more cloud-like in design and procurement, and as we enter the next wave of product availability, there is a tremendous opportunity for the SP Router Router market to go through its own disaggregation transformation,” said Alan Weckel, Technology Analyst at 650 Group. “The development of software-based routing technology that can be sold separately from routing hardware has spawned the Disaggregated Routing market, causing soaring growth.”

About 650 Group
650 Group is a leading Market Intelligence Research firm for communications, data center, and cloud markets. Our team has decades of research experience, has worked in the technology industry, and is actively involved in standards bodies. 650 Group focuses on leading-edge market trends and research and prides itself on first to market research with numerous research programs focused on Cloud and technology trends.

Next Article UAE being recognized as Premium Tourist & Leisure Destination with Growing Number of Expats to Drive Car Rental Market.

The digital summit confirmed speakers from Amazon, Verizon, Wayfair, & more to speak on top use cases in retail, supply chain, & marketing on April […]