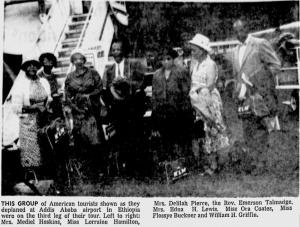 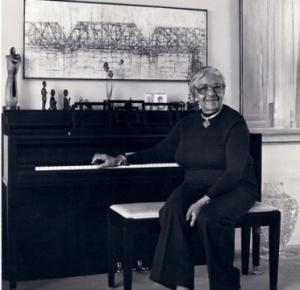 There is so much complexity to her life and career.

MONROVIA, MD, UNITED STATES, September 1, 2021 /EINPresswire.com/ — Delilah W. Pierce lived her life concerned with many aspects of her community, America and the world. Take a look at some highlights below:

Honorable John Conyers, Jr (D-MI) said in his Extensions & Remarks
“The best paintings are the semiabstract landscapes by Delilah Pierce and portraits by LeRoy Gaskin.” https://delilahwpierce.com/2021/01/22/honorable-john-conyers-highlights-delilah-w-pierce-in-extensions-of-remarks/

Honorable Walter E. Fauntroy (D-DC) said in his Extensions & Remarks
“…Born in Washington, D.C., Delilah Pierce studied at Howard in the late 1930’s with James Porter. In 1962 Pierce received an Agnes Meyer Fellowship to study and travel in several African countries. The realities of an American of part African ancestry visiting Africa was significant for it not only represented links to ethnicity in a historical sense, it provided for Pierce an opportunity to become one of a handful of African-American artists to travel to Africa and to do so before it became popular in the late 1960’s.” https://delilahwpierce.com/2021/01/19/congressional-tribute-to-six-washington-artists-hon-walter-e-fauntroy/

Delilah Pierce Travels Europe & Africa
On June 23 of 1962 Delilah W. Pierce and a group of business owners, educators, and clergy left for an organized trip outside of America. This trip took them to Holland, France, Italy, and Greece. After their Europe tour the group traveled to Lebanon, Syria, Jordan, Jerusalem, and a multi-country tour of Africa. Delilah’s sister Mediel Hoskins, a housewife and married to New York City chef Jack Hoskins, also made the trip. Significantly, the group tried to meet with Emperor Haile Selassie. Click to learn what happened: https://delilahwpierce.com/2013/07/25/delilah-w-pierce-among-the-first-organized-group-of-american-blacks-to-travel-to-ethiopia-in-1962/

Department of State Art In The Embassies Program
The artists on exhibit vary in period and styles as well as age and techniques. Each work comprehends various and sundry experiences and modes of expressions. They offer no cause to plead or interest to serve only to translate in visual form the shared emotions and ideas basic to all mankind.”

Delilah W. Pierce Exhibits in the United Nations Second World Black & African Festival Of Arts & Culture in Nigeria 1977
In 1977, from 15 January to 12 February, the Second World Festival of Black Arts or Black and African Festival of Arts and Culture – known as FESTAC ’77- took place in Lagos, Nigeria, under the patronage of President Olusegun Obasanjo. Attended by more than 17,000 participants from over 50 countries, it was the largest cultural event ever held on the African continent. https://delilahwpierce.com/2013/08/18/delilah-w-pierce-exhibited-at-the-second-world-black-african-festival-of-arts-culture-in-nigeria-1977/

“Knowing her personally offers a different perspective on her pathology which impacted her art, advocacy, and career – and rightfully so! Aunt Delilah, and her husband Joseph Pierce (Uncle Joe), viewed the world in a way reflected in their personal library. For one, an original bound copy of Thoreau’s ‘Walden Pond’ and Frost’s ‘A Tale of Two Cities’ are among other classics that lived on their shelves. It makes total sense when synthesizing her landscape paintings of Martha’s Vineyard or the forest paintings. Or, her “red roof” paintings of the River Tay in Scotland (previously unknown). My Great-Great Aunt was concerned with capturing the beauty of the world in the midst of the fight for equal access to education, human dignity, economic opportunity and the right to have strong vibrant eco-systems. She lived through the Red Summer of 1919 when protests and mass murder broke out in Washington, DC, Tulsa and other cities, uncoordinated perhaps, because of inequality and White supremacy at the time. Through all of that, she was interested in living “simply” and that is also the reason why she and my family built a cozy cottage in Oak Bluffs on the island of Martha’s Vineyard. Our family doesn’t believe in flash or using more than we need – A key transcendental tenet. One other point is that some unseen portraits she painted support the idea she had a concern for highlighting Black Aristocracy, if you will, by creating portrait style paintings of very regal looking African Americans. There is so much complexity to her life and career. Yes, she was friends, collaborated, and advocated with people like Charles Drew, Langston Hughes, and W.E.B. Du Bois. Her paintings didn’t reflect the same Black Arts depictions as others in her cohort – and that is ok too. Yet, she DID depict and express the diverse compositions within the Black Arts Movement – Simply amazing!”