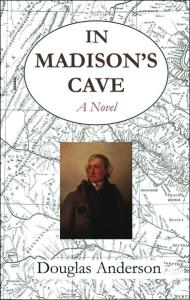 In Madison’s Cave, an epistolary dialogue between Thomas Jefferson and John Adams by Douglas Anderson officially launches on September 14, 2021.

PHILADELPHIA, PENNSYLVANIA, USA, September 14, 2021 /EINPresswire.com/ — “We two ought not to die before we have explained ourselves to one another.”

John Adams wrote those words to Thomas Jefferson early in the long series of letters they exchanged near the end of their lives. In Madison’s Cave is Jefferson’s imaginary explanation, organized around four drawings that he hopes will map the route to a complete emancipation of human nature. The souls of men are demons, Jefferson begins, but he is convinced that he has built a verbal machine to exorcise them, a mechanism hidden in the pages of his notorious Notes on the State of Virginia.

The key to the machine is the outline of a limestone cave in the Shenandoah Valley that Jefferson made not long after the death of his wife and that captures, for him, the essence of the human underworld, its monsters and its redemptive lessons. In a series of chapters that mimic those of his infamous book, he ushers Adams into that underworld. This experimental epistolary novel considers early American history, government & politics, education, race relations, and other themes that still resonate in modern American life.

In Madison’s Cave — an historical novel centered on Founding Fathers Jefferson and Adams is now available! In Madison’s Cave officially launches on September 14, 2021 and may be purchased directly through our distribution partner at https://www.parlewdistribution.com/store/p174/Madisons_Cave.html#/ or from Amazon, Barnes & Noble, Bookshop.org and other fine retailers.

What Advance Readers Are Saying:

“Anderson’s Jefferson and Adams are fully breathing and believable; brilliant and wrong-headed; visionary and cantankerous; stimulating company from start to finish. In Madison’s Cave is a quirky, one-of-a-kind feat.”–Thomas Mallon, author of Henry and Clara and Fellow Travelers

“This exquisite historical novel unfolds as an imagined dialogue between friends and political rivals Thomas Jefferson and John Adams. Beautifully lyrical with rich descriptions and the deep musings of two old men with a long history together, Anderson’s book is imaginative but based on painstaking research. A wonderful read for any fan of history and fine literature.”–Rebecca M. Pritchard, author of Jeremiah Hacker: Journalist, Anarchist, Abolitionist

Douglas Anderson grew up in southern Ohio, attended Oberlin College, and did graduate work in American literature at the University of Virginia. He spent nearly forty years in college teaching, most of them at the University of Georgia where he retired in 2017 as the Sterling-Goodman Professor of English. He has written a number of critical studies including Pictures of Ascent in the Fiction of Edgar Allan Poe (Palgrave, 2009), The Unfinished Life of Benjamin Franklin (Johns Hopkins, 2012), and The Introspective Art of Mark Twain (Bloomsbury, 2017). In 2000 he received a Guggenheim Fellowship to support the completion of William Bradford’s Books (Johns Hopkins, 2003). He and his wife currently reside in Portland, Oregon where he has spent the last few years experimenting with writing novels.