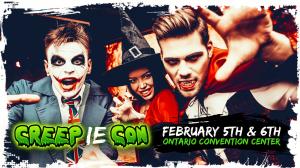 ONTARIO, CALIFORNIA, UNITED STATES, September 6, 2021 /EINPresswire.com/ — CreepIE Con is bringing some of the biggest names in Horror to the Ontario Convention Center in Ontario, California on February 5th & 6th, 2022 along with a curated selection of over one hundred of the best vendors.

Tickets on sale now at CreepIECon.com. For a limited time, tickets for Saturday, February 5th are just $25 and $20 for Sunday February 6th. Weekend passes are $40 making the convention one of the best entertainment values in Southern California.

The IE in CreepIE Con represents the Inland Empire region of Southern California where the weekend event takes place.

The first wave of celebrity guests announced include a very rare convention appearance by The Chiodo Brothers who are the writers, producers and directors of the 80’s cult classic film “Killer Klowns from Outer Space” along with Danielle Harris, Scout Taylor-Compton and Kristina Klebe from Rob Zombie’s “Halloween”

Many of the Celebrity Guests will be in their iconic character costumes for paid photo opportunities including Andrew Bryniarski as “Leatherface” from “The Texas Chainsaw Massacre,” Bob Elmore as “Leatherface” from “The Texas Chainsaw Massacre Part 2,” C.J. Graham as Jason Voorhees from “Friday the 13th Part VI: Jason Lives” and this generation’s leading “Scream Queen,” Danielle Harris in the infamous Clown Costume from Halloween 4.

CreepIE Con will have its fair share of influencers, Cosplay stars and YouTubers in attendance including “The Grimm Life Collective,” ‘The Titans of Terror” and “Creepy Cute Jaylah”

The City of Riverside’s own Special Effects master and star of SyFy’s “Face Off” Eric Fox, will be doing SFX demos at his booth both days.

In addition to all the Celebrities and Vendors, attendees can enjoy fun filled Experiences.

CreepIE Con takes place one week before Valentine’s Day and to celebrate the festivities, “Horror Speed Dating” will be taking place both days of the convention with separate sessions for the Hetero and the LGBTQIA community. Already have a significant other? There will also be “Horror Speed Friending” sessions on both Saturday and Sunday. The leaders in the convention speed dating industry, “Super Sonic Speed Dating” will be hosting the sessions.

Other Experiences include the “Inked in the I.E.” Tattoo area, Autograph Alley, The CreepIE Con Vintage Gaming Experience presented by Pixel Vault Games, Art’s Sideshow featuring the best Horror Props and The EctoXO Experience with Instagrammable Photo Opps from your favorite ghosts.

CreepIE Con is co-produced by Fearsome Figures and SoCal Social.

CreepIE Con will be following all State of California mandates and guidelines regarding Covid-19. Updates to the event policies will be posted frequently at CreepIECon.com

SoCal Social is quickly establishing themselves as a top pop culture event production company in Southern California with over 2 decades of event direction and marketing experience.