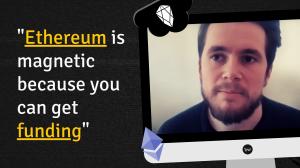 In an exclusive interview with Bywire News Dao Bull, winners of Block.one’s hackathon talk the future of the blockchain and why they might walk away from EOS.

A month is a long time for us. We don’t want to wait, we’re not going to wait.”
— Callum Dickson – DAO Bull

LONDON, ENGLAND, May 27, 2021 /EINPresswire.com/ — In a bombshell exclusive interview with Bywire News, the winners of Block.one’s recent hackathon have hinted they may consider leaving the EOSIO blockchain. Head of UX Callum Dickson told news site Bywire that a lack of support from Block.one meant they and other developers may have to look elsewhere.

DAO Bull scooped first prize at Block.one’s recent hackathon, Beyond the Blockchain. The brief was simple: to create a solution using the EOS blockchain and Google Cloud which can spark real world change.

Their solution was DAO Bull, a centralised autonomous organisation which gives users an opportunity to create their own online presence.
Using the power of the blockchain, DAO Bull can be used for any organisation and offers a range of tools which other traditional products simply cannot offer such as the ability to raise money securely or organise community projects.
Users will be able to select from a number of different forms of governance structures and tokenomics to determine how their community will be run. Dickson, believes it’s a game changer.

Speaking to independent news blockchain publisher, Bywire, he said: “With a Decentralised Autonomous Organisation we have a whole new set of features which are brought about because of the blockchain. These would include being able to raise capital, being able to effectively govern and allocate that capital which is a very new things for online communities”.

However, a month after their victory, they say they Block.one has yet to speak to them about providing support, or how their technology should move forward.

“A month is a long time for us”, says Dickson. “We don’t want to wait, we are not going to wait”.

They are not alone. Over the past twelve months, developers have been walking away from Block.one in their droves. According to recent data, 85% of developers have left within a year with the community complaining about a lack of attention and support.

Dickson adds: “The EOS space seems to lack leadership or any communication from Block.one to the community. When you talk about decentralised projects the community is a little salty because they know that you’ve made so much money and they want to see where the money has gone”.
Block.one launched its official IPO for EOS in 2017 and raised a record $4bn. It is billed as a next generation blockchain offering superior speed and scalability to rivals such as Ethereum. However, since launch it has struggled to gain the traction it would have hoped and much of its developer community has started to raise concerns.

Despite all that, Dickson remains a fan of EOS and the technology.

“I think EOS is the only technology which is ready for prime time right now today”, he says. “I think that seems to be getting forgotten by the community. There is a huge gap between the technology and the perception of that technology in the community. EOS seems to have a massive branding problem”.
However, he believes poor branding and a lack of support has stood in the way way of progress, and opened the door for others such as Ethereum and Charles Hoskinson’s Cardano (ADA). Both have made rapid gains in recent times.

The concern for EOS is that they risk missing the boat. DAO Bull is continuing to develop as a product and is working towards a full launch. No decision has been made about what blockchain technology will be used. It has capital on the table and interest from other Blockchains. While they aren’t giving up on EOS just yet, time is ticking and other chains are knocking at the door.

About DAOs
Decentralised autonomous organisations (DAOs) are represented by rules encoded as a computer program which is transparent and controlled by members of the community rather than by a centralised organisation such as a corporation or government. One of the most famous examples of a DAO is Bitcoin, which brought cryptocurrencies and the blockchain to the world’s attention.

About DAO BULL
Dao Bull is a decentralised application, designed to allow its users to create their own DAO’s in just minutes. With Dao Bull users can start managing financials, shareholders, governance and much more.

About Bywire
Bywire News is a world first, blockchain powered democratic platform where people can read news that they can trust. Stored on the blockchain news is clear and verified with all editing histories freely and publicly available to see.

Bywire has partnered with many of the most popular independent media publishers and creators from across the UK to create a fully-customisable, democratic, accountable, audience-led news and media network and mobile application (App).

Could EOSIO/Block.one Hackathon Winner Walk Away from EOS?