From hydrogen gas to your green hydrogen powered vehicle 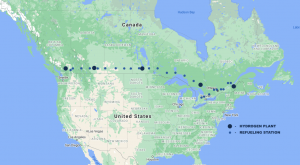 By 2024 the Canadian Hydrogen pathway will replace 280 tons of daily gas/diesel.

SQUAMISH, BC, CANADA, September 10, 2021 /EINPresswire.com/ — Quantum Technology Corp. of BC, Canada, a leader in cryogenic technologies celebrating 40 years in business, has finalized the engineering design for Phase 1 of an ambitious project to supply the main Canadian pathway with green hydrogen for light and heavy transportation.

The project includes over 40 refueling stations strategically situated between Quebec City, Quebec and Vancouver, British Columbia. The stations will be supplied with liquid hydrogen from initially four hydrogen liquefiers located in several provinces, all powered by green electricity. The total capacity of the green hydrogen supply to be produced in Phase 1 of the project will replace around 2,000 barrels of oil per day (280 tons of daily avoided gas/diesel) by 2024. The capacity will be increased as the transportation infrastructure is developed. The value of the project is estimated at 300MM CAD. Quantum Technology is in active discussions with power and transportation companies to load the plants/distribution network upon start-up.

Quantum Technology is currently building a medium-size hydrogen liquefier for a major international customer, one of the only less-of-a-handful of liquefiers ever built in Canada.