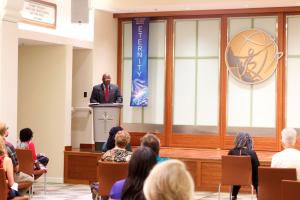 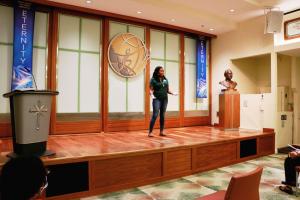 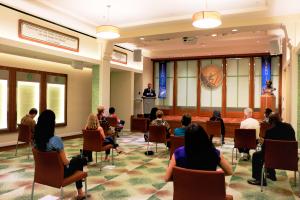 The planet has hit a barrier that prevents any widespread social progress: drugs and other toxic substances.”
— L Ron Hubbard

SACRAMENTO, CA, USA, July 22, 2021 /EINPresswire.com/ — The International Faith Based Coalition, Foundation for a Drug-Free World and Community Activist Henry Harry came together at the Church of Scientology in Sacramento to promote Drug Awareness and Prevention efforts.

Recognizing that drugs represent a multi faceted problem to society, they all came to promote their respective approaches to the problem of drugs and addiction emphasizing education and prevention.

President of the International Faith Based Coalition Tak Allen spoke of their efforts to empower the underserved community by educating community and state officials about the devastating effects of drugs in their community and the negative and disproportionate repercussions and effect of legalization efforts on their community’s.

Allying other faith based leaders in the underserved areas of the City Ms Allen has created an effective voice of reason and testified first hand to the negative impact of these efforts on the African American Community to various leaders.

Henry Harry a 29 year law enforcement veteran spoke of his community efforts to engage youth and steer them away from drugs using various tools and the Truth About Drugs Booklets.
Citing the following Numbers from the CDC:
2017- 70,000 people died by OD
2019- 70,630 people died by OD.
In 2020 – An NPR report on 93,000 people dying of OD. ref: www.npr.org/2021/07/14/1016029270/drug-overdoses-killed-a-record-number-of-americans.
A local KCRA news report in 2020 where county fire agencies responded to 1150 calls where Naloxone was administered in suspected overdoses, an average of about 3.1 per day.

Henry stated that with numbers like these; “The position that illegal drug-use must be decriminalized, and that it is not harmful, is one of the most dangerous ideas that is being pushed on the American society”. The number of overdose deaths are a cause of concern and evidence is growing that these efforts have expanded drug use.

Local Church Public Affairs director Mike Klagenberg spoke to the Church of Scientology’s support for The Foundation For A Drug-Free World and their Truth About Drugs campaign.

He showed the campaign resources which include the “Truth About Drugs” educational booklets, award winning video documentary entitled “Real People, Real Stories”, Public Service Announcements and an Educators Guide. The program is the largest non-governmental drug information and prevention campaign educating youth about drug abuse in 180 countries and used by over a thousand governmental, law enforcement and community organizations.

As written by church founder L Ron Hubbard; “The planet has hit a barrier that prevents any widespread social progress: drugs and other toxic substances” and thus the church has supported drug prevention efforts over the years and are proud to offer their printing facilities at no charge to help supply the Truth About Drugs materials as a public benefit.

For more information about these and other programs you can contact them as follows;
International Faith Based Coalition: https://www.facebook.com/InternationalFaithBasedCoalition/
Church of Scientology of Sacramento; https://www.scientology-sacramento.org/

Mike Klagenberg
Church of Scientology of Sacramento
+1 916-801-0671
email us here
Visit us on social media:
Facebook