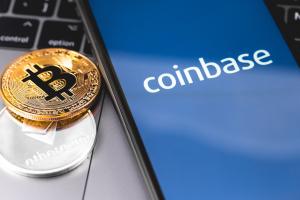 We’re also kind of what you might call an index bet or a leveraged bet on the crypto space more broadly.”
— Brian Armstrong, Coinbase CEO

When Coinbase launched Wednesday afternoon (1:25pm EST) it was valued at $250 a share. It soon rose to a high of $429 but has fallen since, however at the time of writing it has not fallen below $300. The price of COIN signals the market’s future indications of crypto currencies overall, as well as the future for a platform such as Coinbase which enables users to efficiently utilize such currencies.

The IPO of Coinbase also symbolizes another avenue for investors to join in on the crypto craze while maintaining their distance from it. Crypto currencies such as Bitcoin, Etherum, Litecoin, and others are highly volatile. While the price of Bitcoin has reached a new historic high this past week ($64,000 USD), some believe in anticipation of Coinbase’s IPO, many remain highly critical of the currencies themselves and the long term worth of all forms of crypto. Such volatility has prevented larger firms and seasoned investors from dabbling in the currency, believing much of it’s worth to be attributed to a bubble.

Overall, Coinbase going public signifies how stable and reputable the crypto industry has become as well. Their valuation and stock price indicates that investors believe there is robust room for growth and long term applicability for the company. Coinbase has developed a reputation as a “kingmaker”, due to the limited number of crypto currencies it lists and authorizes for trading on it’s platform. For example Dogecoin, the crypto currency often tweeted and hyped by Elon Musk and others, is not available for purchase on Coinbase. This is largely due to the “meme-ish” nature of Dogecoin itself. Essentially, whichever crypto currencies Coinbase lists, rise in value as they become legitimized in a way for the broader market and investors.

Future valuations for Coinbase should be incredibly favourable then, given their role as the platform which “knights” new crypto currencies. However, given that Coinbase is inextricably linked to Bitcoin and other prominent crypto currencies, their value and stock price will likely be tied to the success of those currencies as well. In the event that the crypto currency bubble does indeed pop, the prices of all currencies could plummet in addition to the stock price of Coinbase.

However, fears about a bubble bursting seem misplaced. Crypto currencies have been steadily rising in value for the past decade, and likely represent a new era of business, trade, and transaction (along with Blockchain technologies and NFTs). That is not to say they will keep rising, and could not be in store for major market corrections. Bitcoin itself has risen significantly in price since the New Year alone, nearly doubling in price. Corrections are to be expected, but a complete crash in the cryptocurrency industry seems unlikely. The presence of platforms such as Coinbase, going public and gaining traction in the market, could be the signal investors need to take the plunge and invest in crypto itself.

Want to learn more? Visit us at The Financial News to get the latest on market news, stock movements, economic policy, and more from the world of finance.

Written by Nico Minardi of Mrkt360.

What Makes a Home Sellable in the Covid Marketplace? Travis Patrick White Examines These Factors

Global Cigarettes, Cigars And Cigarillos Market Trends, Strategies, And Opportunities In The Market 2021-2030