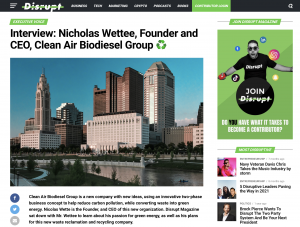 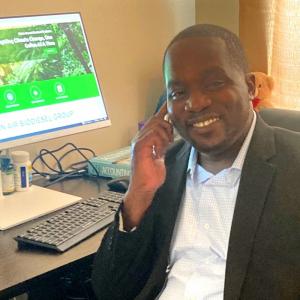 Ohio’s newest Biodiesel producer had their Founder, Nicholas Wettee featured in an interview in Disrupt Magazine, an online publication focused on entrepreneurs

We are creating a network of used cooking oil reclamation bins throughout the city, and then transforming that waste using organic chemistry to produce a clean-burning diesel fuel, known as biodiesel.”
— Nicholas Wettee, Founder and CEO, Clean Air Biodiesel Group

COLUMBUS, OHIO, UNITED STATES, October 1, 2021 /EINPresswire.com/ — The State of Ohio’s newest Biodiesel producer had their Founder, Nicholas Wettee featured in an interview with Disrupt Magazine, a leading online publication focused on entrepreneurs who are growing new economies, in underserved communities around the world.

Clean Air Biodiesel’s Founder and CEO was interviewed by Disrupt for the Executive Voices section of this innovative, online news source. The discussion started by going back to Mr. Wettee’s upbringing in the Republic of Liberia, and how that influenced his decision to start his company Clean Air Biodiesel Group. During the interview session one of Nicolas’s answers best provides a synopsis as to his influences.

DISRUPT: I’m not sure I understand what you mean, could you expound a little bit more about how your upbringing brought you to where you are today?

Wettee: What I mean is, 30 some years ago when I was born, Liberia did not have all the modern conveniences, and resources that one takes for granted here in the United States. We had to turn to natural resources to build our lives. In doing that one becomes quite resourceful, learning how to reuse, repurpose, and recycle the resources you do have.

This perspective led to the creation of his company, and the methods that are being used to manufacture biodiesel that will lead to a cleaner and greener future for the state of Ohio. In the Disrupt article, Nicholas outlines his two-part plan for the Clean Air Biodiesel Group.

Wettee: Our plan is simple; we reduce harmful waste from clogging our cities drainage system or ending up in landfills. We are creating a network of used cooking oil reclamation bins throughout the city and then transforming that waste using organic chemistry to produce a clean-burning diesel fuel, known as biodiesel.

Biodiesel can run in any diesel engine without modification, leaving a smaller carbon footprint for that diesel engine. Biodiesel is cleaner, more efficient and its production is being subsidized by the US Federal government as part of its initiatives to slow global warming.

To learn more about Clean Air’s used cooking oil reclamation and recycling program for the city of Columbus, Ohio please visit their website at: https://clean-air-biodiesel.com/oil/

These are very admirable plans, and a big undertaking, but apparently Clean Air’s Founder has even bigger plans, that includes his homeland, The Republic of Liberia. His new future plans for Clean Air include purchasing acreage in Liberia to build a palm oil plantation. “We want to help foster both ecological and economic growth in the United States and my home country,” said Mr. Wettee. “Although this is a long-term plan, we have to start developing growth of our feedstock now as we build production and distribution of our green biodiesel in the U.S. market.”

Biodiesel producers around the world are creating end-to-end control of feedstock for production. Leading industry players are partnering with farm cooperatives and growers to secure their supply of the soybean, canola and other oils necessary for biodiesel production. “Initially we’ll gain most of our feedstock from the used cooking oil reclamation and recycling program,” reports CEO Wettee. “But we have to plan for the future, it will take several years for the palm plantation to start actually producing the oil we will need, so we’re starting now.”

“When considering the environmental benefits and performance enhancements of biodiesel,” he continued. “The creation of these plans is a long-term win, for not only for the citizens of Ohio consumers and our environment, but also, for my birthplace, which is in great demand of more economic prosperity. Demand for this greener biodiesel fuel product in North America is expected to increase from 1 billion gallons to 2.4 billion gallons annually by 2025.