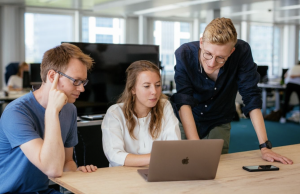 Over the last 6 years, tech company CitizenLab has learned a lot from the way governments and organizations have transformed their beliefs and way of working.

There’s no longer a need to explain to governments why community engagement is important, but rather a burning question of how to digitize dialogue and bring engagement with community members online.”
— Wietse Van Ransbeeck

NEW YORK, NY, UNITED STATES, September 24, 2021 /EINPresswire.com/ — Since 2015 when CitizenLab launched its community engagement platform in Belgium, the company has scaled across the world and worked with more than 300 governments in 18 countries.

Over the past 6 years, CitizenLab’s team has witnessed first-hand how governments have transformed their beliefs and ways of working. As CEO Wietse Van Ransbeeck reflected, “Mayors have embraced the paradigm shift from a closed democracy to an open democracy. They are increasingly aware of the need for inclusive and participatory decision-making to legitimize their policies and gain trust from their communities. Of course, since early 2020, COVID has accelerated the digital make-over of these processes. There’s no longer a need to explain to governments why community engagement is important, but rather a burning question of how to digitize dialogue and bring engagement with community members online.”

The digitization of government services and programs has only just begun. Having listened to the governments they work with over the course of the pandemic, CitizenLab is planning to launch several new features to support expanded community engagement efforts. The first new addition will be a Participation Academy to help governments and organizations from around the world connect and share good practices, as well as lessons learned, across borders. CitizenLab is also developing a set of new tools to support deeper online deliberation through discussion and voting options, and has plans to expand its community insights to incorporate more of the tools governments already use. CitizenLab operates on the belief that community engagement shouldn’t be hard, and that it should be accessible to all.

While the private sector’s influence on government is often discussed, CitizenLab’s latest developments are proof that there is a lot to learn from innovative public servants as well. As governments reconsider how to address a pandemic, climate change, mobility issues, and more, it will be even more important that they co-create solutions together with their communities. And if the last 6 years of CitizenLab’s growth are indicative of anything, it’s that governments are more ready than ever to challenge the status quo and work together with their constituents to build more resilient communities of the future.

About CitizenLab: CitizenLab is a community engagement platform used by local governments & organizations to connect with residents, engage them in decision-making, and build trust through dialogue. The platform equips you to reach more of your community, tap into their collective intelligence, and make decisions based on real-time data.