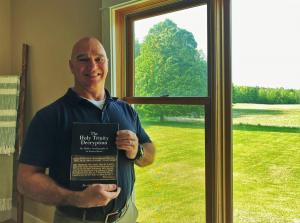 I simply followed the clues where they led me.”
— Jake Roberts

POTSDAM, NY, UNITED STATES, October 20, 2021 /EINPresswire.com/ — New author and high school English teacher, Jake Roberts, recently made astonishing discoveries by studying a famous monument associated with one of his favorite writers, William Shakespeare. A few friends researching for and appearing on the hit television show The Curse of Oak Island on History Channel, had been studying the plaque appearing on William Shakespeare’s Funerary Monument in Holy Trinity Church in Stratford-upon-Avon. Knowing his interest in cryptography, they suggested he take a look. He did. After finding messages encrypted by Sir Francis Bacon within the plaque, he realized he had a major discovery on his hands.

“Certain features of the text indicated we were dealing with a transposition cipher,” Mr. Roberts stated. “That meant finding the correct key to rearrange the characters which reveals the cipher texts. So that’s what I did.” In fact, the veteran teacher discovered multiple shocking messages, including the answer to the question – Did William Shakespeare write “Shakespeare?” He matter-of-factly responded with, “no. The messages explicitly state that Sir Francis Bacon was responsible for writing the works of Shakespeare. But that was by far the least controversial message.” While theories proposing alternative authors for Shakespeare are nothing new, this could be the first time anyone has found the statement coming from Francis Bacon himself.

When pressed on the how he could be sure his interpretations were correct, Roberts said, “I used valid and accepted standard operating procedures and decryption techniques. They allowed me to avoid being subjective. I simply followed the clues where they led me.”

The messages and his deciphering techniques appear in his book, The Holy Trinity Decryption: The Hidden Autobiography of Sir Francis Bacon. In addition to the Shakespeare authorship question, the messages name Bacon’s true mother and his royal identity, and even the names some of his aliases, which are among the most shocking and controversial messages hidden within the plaque. Some of the information even revealed a treasure map and led to presentations for none other than brothers Rick and Marty Lagina, of History Channel’s “The Curse of Oak Island” fame.