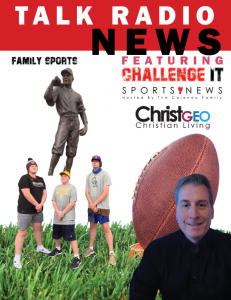 “Challenge It!” will feature sports news, sports trivia & discussion, with calls from the
listening audience, about all aspects of competitive and team sports

Taste and see that the LORD is good; blessed is the one who takes refuge in him.”
— Psalm 34:8

NEW YORK, NEW YORK, USA, September 29, 2021 /EINPresswire.com/ — ChristGEO Media Group will be featuring an exciting new radio show this coming season on the ChristGEO network hosted by media professional and sports enthusiast Joe Calendo. “Challenge It!” will feature sports news, sports trivia and discussion, with calls from the listening audience, about all aspects of competitive and team sports. The new show will be Christian-themed and family-oriented, with a broad anticipated audience of sports lovers across the United States.

Joe will be joined on the program by his three sons Jacob (13 years old), Joshua (16 years old) and Joseph (18 years old) in a unique conversational format. ChristGEO and Calendo are very excited at the show’s potential to reach a vast audience which is currently underserved or neglected by most of the mainstream media.

Calendo summed the show up this way, “’Challenge It!’ Is going to be a family sports talk show where you can come with your bold statements about any sports topic but get ready to throw your Challenge Flag!” Calendo has a broad and comprehensive educational and experiential background in virtually every aspect of broadcasting, hosting, education and sports. His resume is quite impressive, and his accomplishments are exceptional.

He worked on the air as a disc-jockey at Wheaton College Radio (WETN) and attended Omega School of Communications in Chicago. He has also worked as a disc-jockey at different clubs, and mobile disc-jockey companies in the Northwestern suburbs of Chicago before running his own business as a disc-jockey and entertainer called Music-In-Motion. He is a graduate of Judson University with a B.A. in Human Services where he also ran on the school’s cross-country team (Calendo is a former marathon runner). He earned his Teaching Certificate from Trinity International University in Deerfield, Illinois, and in 2006, earned his Masters Degree in Human Services with a concentration in School Counseling.

He has worked in the field of education for over twenty one years as a coach, physical education teacher, Director of Guidance, Enrollment Advisor, High School Counselor, and Academic, College, and Career Advisor. In 2014, Calendo was awarded Educator Of The Year in Macon County, Illinois.

He has coached at the middle and high school level in the sports of baseball, basketball, cross-country, and football. While Calendo is a diehard Chicago sports fan who loves the bears, bulls, Cubs, and Blackhawks, he promises to be fair and objective in his assessment of the performance of all teams and players, regardless of affiliation.

Calendo stated that “We’re excited to partner with ChristGEO because it allows us to promote our Christian faith through a platform of a sports talk show while having a lot fun as a family. I believe that our show endorses and supports family and Christian values in the arena of a sports talk show. We believe it’s a unique format and concept that a lot of families can relate to. It’s become evident that the modern mainstream media is very powerful but can be biased in their reporting. As Christians we need more alternatives in mainstream media to share our faith. ‘Challenge It!’ on the ChristGEO radio network is going to be an exciting departure from business as usual in the media.”

The ChristGEO network, with its pro-Christian, pro-family and educational framework, provides an ideal alternative to today’s mainstream media, with its ever-increasing barrage of carnage, sex and violence, and its lack of sensitivity to the needs of the contemporary Christian consumer. ChristGEO celebrates the Word of God and openly acknowledges its commitment to high-quality education and entertainment that serves to promote Christianity and salvation. There is a definite deficiency in the marketplace of good, clean programming that endorses and courages conformity and compatibility with a higher moral and ethical standard. In a competitive media environment where most of the major market networks are Goliaths, ChristGEO differentiates itself as a solitary David.

In keeping with its ethical foundation, ChristGEO provides free membership subscriptions and other benefits and opportunities to individuals and families living in impoverished nations, and champions campaigns to make Christian family-oriented media and events available to both Christians and non-Christians with an interest in learning more about Christianity. The management of ChristGEO believes that every good, profitable business is morally obligated to invest a portion of its revenues in causes which are beneficial to society at large, and to Humanity as a whole. The company’s CEO has pledged never to lose sight of the Christian ethic and to integrate it into every aspect of the manner in which the company’s business is conducted. In the simplest terms, the strategy is that the company will do very well financially by doing good work socially.

You can visit the company’s website, either to learn more or to become a subscriber or participant, by going to www.christgeo.com . Of note is that ChristGEO is always entertaining candidates for an ever-increasing variety of positions, from clerical and administrative to managerial and creative. You can contact one of the company’s representatives by calling 800-970-0378.