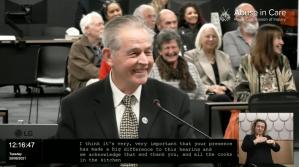 Mike Ferriss, Director CCHR New Zealand; Mental Health Watchdog thanked for its 45-year fight for justice for 300 children tortured with electroshock in the 1970s in NZ. Recent recognition of the child psychiatric abuse reinforced calls for a global electroshock ban.

Mental Health Watchdog is thanked for its 45-year fight for justice for 300 children tortured with electroshock treatment in the seventies in NZ.

LOS ANGELES, CALIFORNIA, UNITED STATES, July 7, 2021 /EINPresswire.com/ — The Citizens Commission on Human Rights (CCHR) International reports that its New Zealand chapter has been acknowledged for its tenacity in a fight for the rights of hundreds of children against one of the worst psychiatric horrors it has documented in its more than 50-year history. For the past two weeks, a government Royal Commission and media have exposed the stories of former patients of Lake Alice psychiatric hospital in NZ who were subjected to electroshock treatment without anesthetic to their heads, necks, arms and genitals in the seventies.

Judge Coral Shaw, hearing the evidence in a Royal Commission inquiry into the torture, thanked CCHR for its “extraordinary efforts that it has gone to since the 70s to keep this flame alive on behalf of the survivors. It’s been an extraordinary effort.”

Mike Ferriss, the director of CCHR NZ, told officials that a ban on electroshock treatment (ECT) is needed under NZ’s Mental Health Act but says this protection is needed globally.

CCHR NZ first investigated children’s allegations of electroshock and sexual abuse in 1976 and had the torture chamber shut down in 1978, but those responsible were never held accountable, causing further trauma to the children. U.S. CCHR chapters were as also investigating the electroshocking of minors, leading to the first law prohibiting this practice on children and youths in 1976.

For over 45 years, CCHR NZ helped instigate numerous actions and inquiries, but when these still failed to fully recognize the victims’ stories, it took the matter to the United Nations Committee on Torture in 2019, which condemned what happened, leading to this year’s government public hearings.

Mr. Ferriss said that at first, “We were seen as the mosquito in the tent, but then with a UN decision behind us, the government then had a lion in the tent. They had to do something.”

Judge Shaw also recognized this, telling CCHR: “You have maintained steadfastly the desire to see justice done. And so, I think we are privileged that you have taken this opportunity to come, address us, provide us with the evidence….”

Many children had been transferred to Lake Alice from foster care homes or were subject to guardianship orders— a practice common, also in the U.S., where children are transferred to psychiatric institutions. At Lake Alice, children as young as five, were electroshocked as punishment for not eating their vegetables, bed-wetting, pillow fights, and smoking.[1] Perceived “bad behavior” was diagnosed as psychiatric illness, justifying the torture, which was passed off as “therapy.”[2]

Aaron Smale, an award-winning journalist, wrote: “They were children, who had been removed by the state from their families….If I inflicted that kind of torture and abuse on my children I’d be in jail and yet for years nobody has been held accountable.”[3]

On behalf of the Lake Alice survivors, Leonie McInroe, extended her “grateful acknowledgement to the enduring support and work of CCHR, your commitment to supporting our claims, and raising important issues on our behalf for over 40 years has proved to be a solid rock for many to lean on. Thank you.”

Mr. Ferriss made recommendations for reforms that CCHR wants to see implemented worldwide. Jan Eastgate, president of CCHR International said that in the U.S., 100,000 Americans—some as young as five—are electroshocked every year. Many are shocked against their will, which recent World Health Organization and United Nations reports say constitutes torture.

Adds Eastgate, “Greater protections are especially important in the U.S. which has a multi-billion dollar ‘troubled teen industry’ where children are drugged, electroshocked, sexually abused, and restrained, the latter leading to deaths. Frequently, acts of child abuse in these institutions are not reported and laws compelling this need to be enforced.”

Mr. Ferriss pointed out: “When the legal process allows a practitioner to treat a person without consent, then the psychiatrist is allowed to electroshock people and administer drugs and call it therapeutic. Thus, it makes it difficult for police to define ill-treatment and ill-intent. Police and all agencies must dispense with the idea that because a person has sat in front of a psychiatrist, that the patient is unstable, incompetent and should never be believed.” This is what happened at Lake Alice.

Changes are needed and CCHR recommendations include:

• Electroshock be universally banned.
• Mental health professional regulatory bodies be mandated to forward complaints of a practitioner’s sexual abuse of patients direct to the police for investigation and prosecution.
• Implement criminal penalties should a psychiatrist, psychologist, psychotherapist or other healthcare or child institutional worker fail to report an incident of practitioner sexual or other abuse of a patient.
• Mandate a requirement for an employee, worker, healthcare professional, including psychiatrists, psychologists, doctors, social workers, therapists, nurses, etc., to report to the police any observed incident of child abuse by any of the above in a psychiatric, behavioral or other child institution.

CCHR, established in 1969, has been responsible for more than 190 laws that have enacted protections against psychiatric abuse. It has a Report Abuse form for anyone wishing to report abuse in confidence.

[3] Corazon Miller, “Those who suffered as children at Manawatu psychiatric hospital to share their stories,” 1 News, 13 June 2021, https://www.tvnz.co.nz/one-news/new-zealand/those-suffered-children-manawatu-psychiatric-hospital-share-their-stories