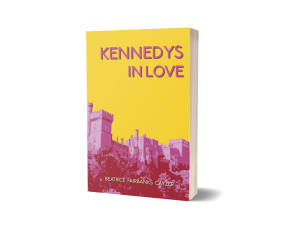 A creative look at the private lives of public figures

COOKSTOWN, NEW JERSEY, USA, September 7, 2021 /EINPresswire.com/ — Public figures often live their lives constantly scrutinized. The details of their day-to-day activities are put on display for the public’s consumption. For those in public service, this extends to their family members. From their travels to what they had for dinner, the details are constantly reported on in the interest of transparency. Respect is still given, however, to some of their intimate moments but still, they pique the public’s curiosity. One can wonder what their relationships are like outside of their responsibilities at work. Cayzer explores the possibilities of these relationships with a creative take on the lives of three siblings in “Kennedys in Love.”

The relationships in Beatrice Fairbanks Cayzer’s life inspire her to write beautiful stories. Her own heritage boasts of a history of public service, as her ancestors helped found the community of Upper Virginia in the 1620s. Beatrice would give of herself to serve her own community by founding the Cayzer Museum for Children. Aside from her humanitarian work, she turned to writing and has produced works inspired by the many places she’s lived. Cayzer’s Rick harrow novels have been awarded the Book of the Year award by the Horseracing Writers Association. She is the wife of Stanley Cayzer, a grandson of Sir Charles Cayzer.

“Kennedys in Love” is a story of both love and tragedy. It tells of the relationships of Ambassador Joseph Kennedy’s favorite children, each one meeting a tragic end to their lives due to his ambitions. Joseph Jr. died during the Second World War flying an aircraft loaded with explosives. His daughter Kathleen died in the arms of her lover in a storm that devastated the plane transporting the couple to Cannes. John F. Kennedy, who served as the president of the United States was assassinated. We are also introduced to Kick and Mark who are on a quest to discover JFK’s assassins and end up becoming targets themselves.

Dive into a tale of political intrigue and romance. Get your copy of “Kennedys in Love” today!

Visit the author’s website at www.beatricecayzer.com to know more about her and her book.