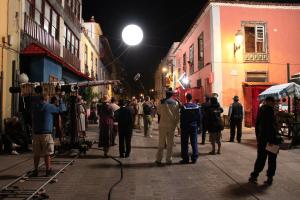 Kristian Denver Diaz together with Film! Canary Islands lines up a slate of projects to be made in Tenerife.

One of the features he brings to Spain is Jake Reid’s “Edge of Justice” starring Kelsey Grammer and Sebastien Foucan.

As well as the big budget “Gladiator” meets “The Last Kingdom” epic “Slave of the Huns” by Spanish writer Thilo Brauer, based on the book of the same name.

He is currently working on a television series gaining interest from multiple platforms with the pilot to be shot in Tenerife later this year.

“People don’t know about the diverse locations in the Canary Islands- until they get here. With Spain growing the industry and the Canary Islands positioning itself as the Hollywood of Europe, it’s the perfect time to create content for an international audience while working with the experienced and top-notch local talent.” Diaz says.

Together they are able to produce content locally for an international audience while accessing the unique locations, perfect climate and best incentives in the world.

In the Canary Islands, the rebates have been set at an extraordinary 50% for the first $1.1 million, and 45% for the rest — the highest rate of deduction in the world.

Film! Canary Islands S.L is one of the few companies that has access to the multiple incentives. With more than ten years of experience servicing all types of productions including commercials, movies, music videos and documentary and reality shows. The company has built a great reputation and also has enough in-house equipment to service Hollywood films.

Recent productions in the Canary Islands have included Jason Bourne, Solo: A Star Wars Story, Wonder Woman 1984, The Eternals and The Witcher.’