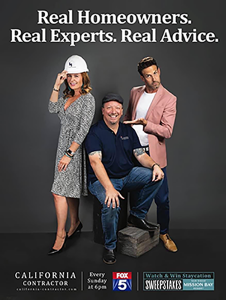 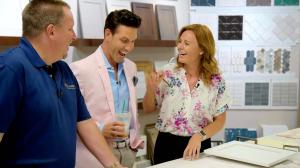 Season 2 of California Contractor releases on Fox 5 San Diego on Sunday, November 7th – but what type of reality TV show, is this, anyway?

SAN DIEGO, CA, USA, November 1, 2021 /EINPresswire.com/ — Home Improvement shows are a reality TV staple. There are many different types of home improvement shows though. Some show you how to do the work yourself, some show you before, during, and after views, some shows show a contractor fixing the mistakes of others, but there hasn’t been a show that advises you on how specifically to proceed with your home improvement project in Southern California — until now.

California Contractor is the latest addition to the home improvement tv genre. It is unique in that it doesn’t show any renovations at all — before, during or after — but shows discussions between contractors and homeowners regarding how to best go about their desired remodels in the Golden State, and which types of contractors would suit their projects best. “What we’re doing is we are meeting with homeowners who are stuck on a project, no matter what size, and we’re guiding them towards solutions so that they can make the best decisions for their family,” said California Contractor creator and executive producer Nicole Crocker. “We show concepts, we show designs, and we provide information for them so that they can get back on track with their project,” Crocker added.

This kind of show is in stark contrast to the rest of the genre. This Old House, the granddaddy of the genre, has spent the past 42 seasons showing viewers how to do their home renovations themselves. In fact, unlike most shows in the genre, one season of this show focuses entirely on a single project.
By contrast, Property Brothers has hosts Jonathan and Drew Scott and their teams work on renovations within a budget set by homeowners at the beginning of every episode. The homeowners are then taken on a “design inspiration tour” to give the brothers an idea of the kinds of things that the homeowners would like to see as part of their renovation. Before, during, and after shots of renovations, as well as explanations of the work being done, are extremely important in this show.

A twist on the genre comes in the form of Holmes on Homes, a show that started in Canada and later expanded to the US. On this show, contractor Mike Holmes and his trusty team of helpers come in to homeowners’ homes and fixes work done badly or left undone by shady contractors. Holmes and his workers live by the credo “make it right”, which is exactly what they do every episode. In one episode, a shady contractor told the homeowner that the renovation was “95% done”. Once Holmes and his team started investigating, they discovered unpermitted repairs, no drywall, poorly-done electrical wiring and plumbing problems, all of which were remedied by the end of the episode. The homeowners are shown the work done at the end of each episode.

“We’re trying to give a different spin on home improvement reality shows,” Crocker said in a Zoom interview. “We’re trying to bring reality into reality TV. We were watching some of the shows that were on mainstream media and realized that a lot of what they were speaking to was inaccurate information for Southern California, based on our own regulations by the Contractor State Licensing Board.”

Another unique aspect to this show is California Contractor’s focus on San Diego County area homeowners, businesses, and experts in the show’s first two seasons. Crocker said the plan is to expand to other cities in Southern California should the show be picked up for more seasons. Season one, comprised of 6 episodes, is currently airing. Season two’s additional six episodes have already been filmed. Season three begins filming in January of 2022 and is currently scheduled to air in Spring 2022.

California Contractor currently airs Sundays on the Fox 5 TV channel @ 6 p.m. as well as a week later on The Bridge streaming channel found on Youtube.