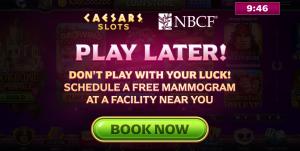 “Don’t Trust Luck. Get Screened” – the campaign as it appeared in the Caesars Slots game

The popular free mobile game removed access to players for a limited period. Players were greeted by a message encouraging them to take a mammogram

Our aim was simple – to save lives by encouraging early detection of breast cancer – and we are proud to have run the “Don’t Trust Luck. Get Screened” campaign during Breast Cancer Awareness Month.”
— Liran Paz, General Manager at Caesars Slots

• The popular free mobile game removed access to players for a limited period
• Players were greeted by a message encouraging them to take a mammogram in nearby facilities across the US, providing help and hope with National Breast Cancer Foundation, Inc.® (NBCF)
• The “shutdown” was part of Caesars Slots’ “Don’t Trust Luck. Get Screened” campaign, which ran in-game and on social media during National Breast Cancer Awareness Month, alongside a $60K donation to the charity
• Campaign aimed to reach over one million players

On October 6th, 2021, from 12 PM PST for a limited period, players were greeted by a striking message – “Play later! Don’t play with your luck, schedule a mammogram now” and were denied access to the game. Instead, as a proud partner of National Breast Cancer Foundation, Inc.®, Caesars Slots’ players were led to a landing page to schedule a mammogram at a local facility.

This campaign has been devised by Caesars Slots, with the National Breast Cancer Foundation, Inc.®, with one goal in mind – to save lives, by encouraging thousands of women to act now to book breast cancer screenings. Mammograms are an important component in early detection efforts, and according to the American Cancer Society, when breast cancer is identified early, and is in the localized stage, the 5-year relative survival rate is 99%.

Caesars Slots is a globally popular free game that is synonymous with Vegas themed entertainment. Despite being a game of luck, during National Breast Cancer Awareness Month, the game told its players, “Don’t Trust Luck. Get Screened”.

This campaign, both in-game and across social media, shared hard-hitting content with a global community of Caesars Slots’ players, of which there is a female majority. The campaign’s focus was to raise awareness about the vital importance of early breast cancer detection and players were directed to the NBCF’s landing page for further reading. The ambition was to raise awareness of the disease among more than a million women across the US and to encourage as many as possible to test for it.

Liran Paz, General Manager at Caesars Slots said: “We undertake several charity-led activities throughout the year, and this is one of the most important campaigns we have ever run. In partnership with the National Breast Cancer Foundation, Inc.®, our aim was simple – to save lives by encouraging early detection of breast cancer – and we are proud to have run the “Don’t Trust Luck. Get Screened” campaign during Breast Cancer Awareness Month. To make it clear how serious we are about this issue, we even shut down our game entirely for a short period of time. Our aim was to grab the attention of our female players in an unexpected manner and motivate them to test. By getting this message out there loud and clear, we wanted to make a life-saving difference”.

Douglas Feil, Chief Program Officer at the National Breast Cancer Foundation added, “Our message during National Breast Cancer Awareness Month was “Knowledge and early detection saves lives”. We are grateful to Caesars Slots for joining with us in sharing this life-saving information with their thousands of players around the world, and even going so far as to temporarily shut down their game to encourage people to book free mammograms. This is an amazingly powerful use of online and mobile gaming to reach thousands of women with this life-saving message during Breast Cancer Awareness Month”.

About Caesars Slots
Caesars Slots is one of the top free-to-play social casino games in the world, with thousands of daily players across multiple platforms. The Caesars trademark is licensed to Playtika by Caesars Entertainment.

About Playtika Holding Corp.
Playtika Holding Corp. is a leading mobile gaming company and monetization platform with over 36 million monthly active users across a portfolio of games. Founded in 2010, Playtika was among the first to offer free-to-play social games on social networks and, shortly after, on mobile platforms. Headquartered in Herzliya, Israel, and guided by a mission to entertain the world through infinite ways to play, Playtika has 19 offices worldwide including Tel-Aviv, London, Berlin, Vienna, Helsinki, Montreal, Chicago, Las Vegas, Santa Monica, Newport Beach, Sydney, Kiev, Bucharest, Minsk, Dnepr, and Vinnytsia.