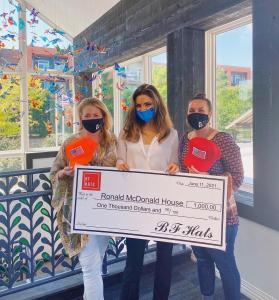 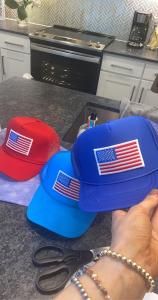 Bryn Carden, the young co-founder of BF Hats, discusses how her organization supports the Ronald McDonald House of Dallas.

DALLAS, TEXAS, USA, September 15, 2021 /EINPresswire.com/ — Bryn Carden is not the kind of college student who barely makes it to class. She strives to go above and beyond with the talents she has to not only be an excellent student but a great citizen in her community, as well. While the young entrepreneur is currently studying Finance with a Real Estate Concentration in the Neeley School of Business, she also supports an organization she holds dear to her heart, the Ronald McDonald House of Dallas.

As college students studying at Texas Christian University (TCU), Carden and Fran Jabbour launched BF Hats in January 2021 as co-founders. The two wanted to bring edge and style together that challenged the ordinary while making a positive difference. A portion of every BF Hats purchase is donated to the Ronald McDonald House of Dallas.

“I cannot express enough the extent of how kindhearted, genuine, and giving the Ronald McDonald House of Dallas team is. They truly let me in with open hearts, which makes giving to the RMDH even more worthwhile,” said Carden.

The Ronald McDonald House of Dallas’ primary goal is to keep families together and support families that have children receiving vital medical care while inspiring strength and giving love. The organization’s House is 78,000 square feet and hosts 79 private bedrooms along with six transplant apartments and four extended-stay suites. The House also has many different playrooms inside and play areas outside to accommodate all ages and multiple interests. Families also have access to a craft room, meditation garden, library, chapel, and media room. Three meals are provided a day by community volunteers in the House’s two large communal kitchens.

The Ronald McDonald House of Dallas is supported and operated by hundreds of staff and volunteers that are unionized under its one purpose, which is why Carden chose American flag hats to release for BF Hats’ new line.

To learn more about BF Hats and make a purchase, visit www.bfhats.com.

About Bryn Carden
Bryn Carden is a young entrepreneur and philanthropist with a passion for real estate and design. She is currently studying at Neeley School of Business, pursuing a major in Finance with a Real Estate Concentration. Besides working towards her degree, she has already begun her entrepreneurial journey as a co-founder of BF Hats and a creator of Styles for Smiles – a company selling bracelets to help fund cleft palate operations for children in developing countries.