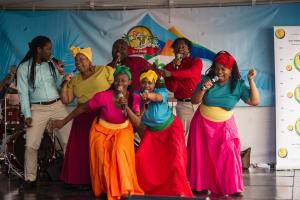 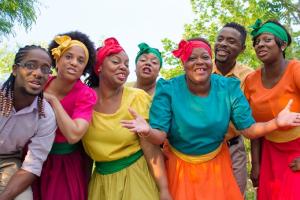 QUEENS, N.Y., USA, May 31, 2021 /EINPresswire.com/ — Caribbean Folk Group the Braata Folk Singers will be expanding their repertoire in their first live production since the pandemic began. The New York-based group will include inspirational and reggae songs at their June 20, 2021 concert.

The Braata Folk Singers, under the creative direction of Jamaican born actor, singer, and producer Andrew Clarke, and the musical direction of Joel Edwards, will present “Rebirth” on Sunday, June 20, 2021, at the Jamaica Performing Arts Center at 6 p.m. A contribution of $20 is recommended per ticket. Tickets can be reserved at braataproductions.org/bfs2021. The Center is located at 153-10 Jamaica Avenue, Jamaica, New York, near the Parsons/Archer subway stop.

Braata Productions is dedicated to giving Caribbean and Caribbean-American artists a platform to showcase their work and talents. Their mission is to transform lives through cultural awareness and the arts and bring Caribbean folk culture, artists, music, stories, movement, and theater into more prominent spaces while providing an opportunity for Caribbean artists to receive greater recognition. The Braata Folk Singers are proud ambassadors of Caribbean folk music. Queens County is home to one of the world’s largest communities of Caribbean expatriates in the world.

The title of the show is a metaphor for the world emerging from the pandemic. Clarke stated the program is inspired by people coming out of their cocoons of homes, apartments, and lofts to a different world than people who lived in pre-covid.

“It is a rebirth of sorts. A rebirth of ways people interact with each other and share space. It is a rebirth in the way we greet strangers and friends. It is a rebirth because we now have a new way of doing things,” Clarke explained. “As COVID winds down, the big query is not how are you doing, but have you been vaccinated?”

Clarke said this is an opportunity for a rebirth for the group as well. “After ten years, we considered discontinuing performances in 2019 before the pandemic hit due to a general lack of support from the community that would allow the group to continue to operate profitably.” The group was largely being offered stipends for performances, which was not a sustainable model. It was then decided that instead of discontinuing performances, we would broaden their musical focus and allow the group to experience a rebirth in the hopes of acquiring more lucrative bookings in the future.

Advanced ticket purchases are encouraged to minimize in-person purchasing and to observe Covid protocols. For those unable to attend the concert, donations are encouraged towards the Braata Folk Singers’ continued existence.

The program is supported in part by public funds from the New York City Department of Cultural Affairs in partnership with the City Council and Council Member Alicka Amry-Samuel.

For more information, to purchase tickets, or to donate to the Braata Folk Singers, visit https://www.braataproductions.org/bfs2021.