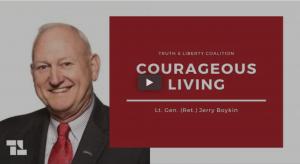 During his presentation Boykin encouraged listeners to live with godliness, honor and courage.

God’s expectation is for us to be warriors in his Kingdom.”
— Lt. Gen. (Ret.) Jerry Boykin of Family Research Council

During his presentation Boykin encouraged listeners to live with godliness, honor and courage.

Many sectors of American society, including schools and the military, are under attack from leftist ideologies that are working to destroy traditional biblical values. According to Boykin, it’s time for Christians to take a stand and respond.

“God’s expectation is for us to be warriors in his Kingdom,” said the general. “I hear this: ‘God’s in control all the time.’ And that’s right. I know God’s in control, but I also know God works through us.”

Through the years, Boykin was called to pray over his soldiers before launching missions. From Iran, to Panama, to Somalia, the general was often positioned to shine the light of the Gospel.

Now retired, Boykin serves as executive vice president of the Family Research Council, which “seeks to inform the news media, the academic community, business leaders, and the general public about family issues that affect the nation from a biblical worldview.”

Boykin encourages Christians – and particularly men through Stand Courageous – to become warriors in the spiritual struggle for truth and righteousness. Now, more than ever, courageous believers will lead the way in turning America back toward biblical values, including honor, truth, and service.

“If you look at the Bible, [God] used warriors – male and female,” said the general. “He’s used warriors in those times when he wanted to make a major change.”

Learn more about the Family Research Council at the organization’s website.

Visit Stand Courageous and learn what Boykin is doing to empower men and families. Also, check out his books ‘Never Surrender’ and ‘Man to Man’.

About Andrew Wommack:
Andrew Wommack is president and founder of the Truth & Liberty Coalition, Andrew Wommack Ministries, and Charis Bible College. He and other Christian leaders established the Truth & Liberty Coalition to educate, unify and mobilize believers in Jesus Christ to affect the reformation of nations through the seven mountains of cultural influence. Since 1968, he has taught God’s Word with clarity and simplicity, emphasizing the unconditional love and grace of God. His vision is to spread the Gospel as far and deep as possible through his daily Gospel Truth television program, broadcast nationally and internationally, as well as through GospelTruth.TV, his internet television network.