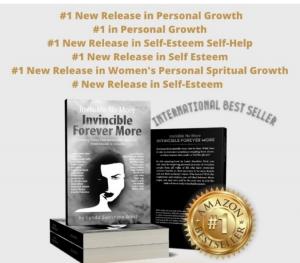 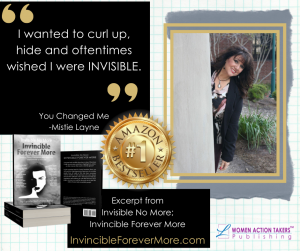 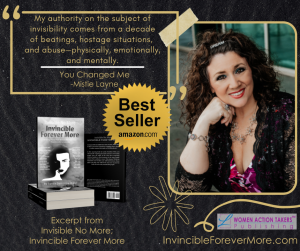 Invisible No More; Invincible Forever More shares stories of women who have gone from invisible to INVINCIBLE.

Through sharing our experiences with transparency, we can JUDGE less and MENTOR more. By LIVING through it and now being on the other side of the adversity, I am INVINCIBLE. I AM A WARRIOR.”
— Mistie Layne

PORT ARTHUR, TEXAS, UNITED STATES, September 10, 2021 /EINPresswire.com/ — International Best Seller, Invisible No More; Invincible Forever More, became the #1 Inspirational new release on Amazon just eight hours after its release! It is filled with the personal and profound stories of twenty-nine amazing women from all over the world. They each share how they felt invisible, became empowered, then took the journey and faced their challenges, so they would be seen. These heart and soul-grabbing testimonies offer hope and motivation for readers everywhere to start their journey toward healing.

Invisible No More; Invincible Forever More was born out of inspiration and a desire to collaborate with other women to bring a powerful message to the world. No one needs to feel invisible anymore. It is time to speak up about your life and the challenges you have been through, so we might all know our invincibility!

“Our stories are about hope, inspiration, motivation, and encouragement. Great book to review and talk about for Suicide Prevention week and month and any other mental health awareness. Helping people to speak up and out so they can heal is invaluable.”
—Lynda Sunshine West, inspirer of this amazing collaboration

“I started fading away into INVISIBILITY when I became addicted to crack cocaine after being left depressed and vulnerable from a divorce. I was a 32-year-old mother of two studying to be a surgeon and should have known better. I was drawn to “escape” the high provided and when Joey came onto the scene, it got insane with paranoia, jealousy, and rages. The control started with little remarks of jealousy, then progressed to checking mileage on my car to checking my phone. When he called the hospital to check on me, he would call the landline instead of my cell phone and I later realized he was making sure I was actually at work. When I thought he was checking receipts to balance bank accounts, I realized he was tracking times and mileage. He became so controlling I couldn’t even take my daughters in my car to Wal-Mart without his permission or “escort.” He dictated my clothes, my food, my music, my everything. I became timid, meek, and unexpressive in fear of a beating. I wanted to curl up, hide, and oftentimes wished I were INVISIBLE. I didn’t want to be seen because I was ashamed I had allowed a man to hit me over and over again and strip me of my identity.“

All proceeds go to support 501(c)(3) Dress for Success

To book Mistie Layne for an interview, email mistielayne@mistielayne.com or book on www.stepupandspeakout.com

Mistie Layne
Step Up and Speak Out
mistielayne@mistielayne.com
Visit us on social media:
Facebook