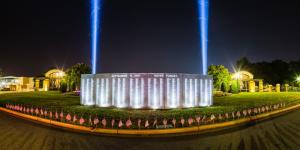 On the twentieth anniversary of the 9/11 terrorist attacks, BJU will commemorate the 2,977 lives lost on Sept.11, 2001, with a display of American flags.

GREENVILLE, SC, UNITED STATES , September 1, 2021 /EINPresswire.com/ — On the twentieth anniversary of the 9/11 terrorist attacks, Bob Jones University will commemorate the 2,977 lives lost on Sept. 11, 2001, with a display of American flags at the front of campus.

In addition, two beacon lights will represent the World Trade Center towers and in front of the beacons, a Wall of Remembrance will display the names of those who perished on that day.

“The 9/11 attacks forever changed our country and impacted a generation of Americans,” said BJU President Steve Pettit. “Most students in our freshmen class weren’t born in 2001. It is important to use this milestone as a teachable moment. Seeing the thousands of flags at the entrance serves as a reminder to our student body, as well as the community, of the lives we lost that day and the triumph of the American spirit in the face of tragedy.”

BJU students will set up the flags near the Wade Hampton Boulevard entrance to the campus. Each flag will represent one of the 2,977 victims—from 115 countries—who perished in the 2001 terrorist attacks. The students will begin assembling the display Tuesday, Sept. 7, and it will remain in place through the morning of Tuesday, Sept. 14.

On Tuesday, Sept. 7, through Friday, Sept. 10, and Monday, Sept. 13, through Tuesday, Sept. 14, the public is invited to view a piece of steel girder from the North Tower of the World Trade Center in the lobby of the Welcome Center, located near the Wade Hampton Boulevard entrance to the campus. The lobby is open each weekday from 7:30 a.m. – 7 p.m.