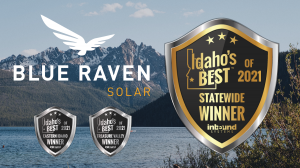 “Our team in Idaho has worked hard to make the customer experience above and beyond. Anyone who is looking to go solar in Idaho should know that they are in great hands with Blue Raven, because it is our goal to make homeowner’s lives easier by facilitating the switch to solar,” said Ben Peterson, CEO of Blue Raven Solar.

Blue Raven maintains a 4.7-star Google rating across three locations in Idaho. The residential solar company has helped thousands of Idaho homeowners make the switch to solar since arriving in 2015. The average solar system installed offsets about 175 tons of carbon dioxide, which is the same as planting 4,000 trees or saving over 4 million gallons of water that would otherwise be used for electricity production.

There are three stages to the Idaho’s Best award process. In the first stage, Idaho residents nominate eligible organizations for any Idaho’s Best category. The top organizations advance to stage two, during which Idaho residents vote for nominees within each category. During stage three, a finalist’s online reviews, overall rating, and number of 5-star reviews on Google are taken into consideration. The biggest and most popular award program in the state, Idaho’s Best is awarded based off of a combination of customer reviews and votes from Idaho residents. More than 100,000 Idahoans participate in voting for these awards each year, so finalists and winners are the people’s choice. To learn more about the Idaho’s Best awards, visit www.idahosbest.com.

About Blue Raven Solar
Blue Raven Solar was founded in 2014 and has expanded to a national top selling solar brand. The company’s mission is “to make homeowners’ lives better by reducing their energy bills, increasing reliance on clean and abundant renewable energy and providing a world-class customer experience through a reliable sales process and a speedy, high-quality installation.” Blue Raven Solar believes all homeowners should have equal opportunity to invest in simple, reliable, affordable, high-quality solar power. Visit Blue Raven Solar at www.blueravensolar.com and follow us on Instagram. Facebook and LinkedIn.

The positive impact COVID19 has had on Phuket’s environment