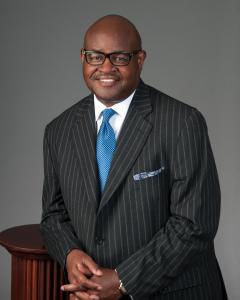 Bethune-Cookman University has appointed Lawrence M. Drake II, Ph.D. as the new Dean of the College of Business & Entrepreneurship.

There’s an opportunity for the College of Business & Entrepreneurship to attract new students…I want us to be at the forefront of 21st century skill development.”
— Lawrence M. Drake II, Ph.D.

“Bethune-Cookman University’s business students will be challenged to elevate to the highest levels of achievement under Dr. Drake’s guidance. His presence on campus will inspire our students to be forward thinking and innovative as they embrace new skills and technologies that are critical for today’s leaders,” says Interim President Dr. Hiram Powell.

As the first in his family to attend college, Dr. Drake matriculated to Fisk University, ultimately receiving a B.A. from Georgia State University in 1977. He earned an MBA from Rockhurst University in 1999, where he was an Executive Fellow. In 2013, he was awarded an M.A. in Psychology from APA-accredited Fielding Graduate University and received his Ph.D. with an emphasis in media psychology in 2015. He holds a certification from the prestigious International Coaching Federation and is a member of Forbes Magazine’s Coaches Council.

Dr. Drake’s vision is to inspire new business professionals to transform the world economy to benefit the under-resourced. “There’s an opportunity for the College of Business & Entrepreneurship to attract new students to our campus. I want us to be at the forefront of 21st century skill development – whether it’s the Internet of Things, cybersecurity, data analytics, or design thinking, we want our students prepared and equipped to lead at the next level,” he says.

His scholarship focuses on the effects of human behavior at the intersection of cognitive science, applied psychology, media innovation, and immersive learning. His publications, papers and presentations include the National Academy of Medicine’s “Stories About Black Men and Their Consequences,” (February 2018), “The Effects of Domestic Violence Ideology, Media Narratives and Images on Male Victimization” (Fielding Graduate University, 2012), and “Watching Black Panther with Racially Diverse Youth: Relationships between Film Viewing, Ethnicity, Ethnic Identity, Empowerment, and Wellbeing” (Review of Communication, 2020). His book “Color Him Father” (2019), which explores the myths about Black fatherhood, has received critical acclaim. Dr. Drake has also presented at numerous scientific sessions, including the American Psychological Association (APA) annual meetings, where he once led a panel on the topic “Two Kinds of Presence: A Comparative Analysis of Face-to-Face and Technology–Based Mediated Communication Methods and The Executive Coaching Experience.”

With over 40 years of leadership experience within several corporations and nonprofit entities, Dr. Drake has served as a founder or co-founder of three private enterprise firms. He also enjoyed an impressive 21-year career with The Coca-Cola Company where he held several key positions, including Division President & CEO of its Nigeria and Equatorial Africa Division. This role included global operations, political stewardship, and partnership management with his franchise ownership partners across Africa, Europe, Latin America, and the U.S.

About Bethune-Cookman University
Founded in 1904 by Dr. Mary McLeod Bethune, Bethune-Cookman University (B-CU) today sustains her legacy of faith, scholarship, and service through its relationship with the United Methodist Church and its commitment to academic excellence and civic engagement. B-CU offers 36 undergraduate and 8 graduate degrees on its main campus. Located in Daytona Beach, B-CU is one of three private, historically black colleges in the state of Florida. The institution boasts a diverse and international faculty and student body of nearly 3,000. For more information, visit www.cookman.edu.