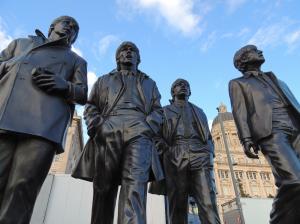 NEW YORK, NEW YORK, UNITED STATES, October 6, 2021 /EINPresswire.com/ — It was the early Sixties when a young rock group from Liverpool created a musical style that took the world by storm, The group was simply called The Beatles, And rock was never the same again. And neither were their fans.

Today, everyone knows The Beatles but do you know their fans? That is what this docufilm is about, the largest ever-growing fan base in the world, It started in the 1960s and has captivated every generation since. From the 20th into the 21st Century the Here, There & Everywhere documentary celebrates the role the fans have played in keeping the spirit of The Beatles alive.

From every corner of the globe, hundreds of fans and those close to the band have come together for this film,

This unique documentary, which is being financed through a crowd fund on Indiegogo also features performances from bands such as The Quarrymen, The
Pete Best Band, The Cavern Club Beatles, The Bootleg Beatles, MonaLisa Twins, The Analogues, to name just a few.

And ultimately, it is the fans that will guarantee the release of this film through their contributions. to the Indiegogo crowd funder, set up by the filmmakers. Fans who contribute to physical perks, which include remarkable pieces of memorabilia and collectible DVDs of the film will also have their names immortalized in the end film credits.

If you wish to contribute to complete this love letter film to The Beatles from their fans go to the funding page
at: https://tinyurl.com/HTAEfilm