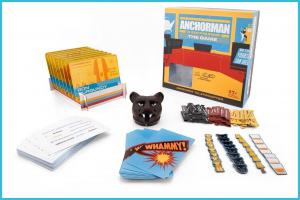 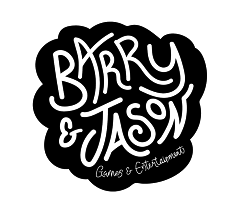 Our goal is to delight fans of the film while still being a hilarious party game for anyone who has never seen it!”
— Jason Lautenschleger

LOS ANGELES, CA, UNITED STATES, July 9, 2021 /EINPresswire.com/ — Real Fake News? Have you ever tried to act like funnyman actor Will Ferrell’s Ron Burgundy (Anchorman) character, who has the ability to read aloud anything no matter how strange or inappropriate, without pause or embarrassment? Now, the fun of Anchorman is available for everyone to play at home, as the game guys at Barry & Jason Games and Entertainment have launched an official, officially brash Anchorman: The Game – Improper Teleprompter.

In an age when terms like fake news are part of the real news, the straight-faced anchorman role is even more fun to play. The Anchorman game, (MSRP $24.99 for 2-8 players ages 17+) is an adult party game where players compete by sabotaging other anchors’ news stories with ridiculous magnetic words and phrases to try and get them to laugh while reading the news.

To play Anchorman: The Game, players can assume the roles of the characters from the movie: Ron Burgundy, Veronica Corningstone, Brick Tamland, Brian Fantana, Champ Kind, Frank Vitchard, Wes Mantooth, and even his mother Dorothy Mantooth! The game, which features iconic art from Mattson Creative, includes magnetic score tokens of Baxter the Dog, Sex Panther, Lamp, and a glass of scotch. It also includes Whammy cards, which feature bits of story from the movie that randomly award points or mix-up the game play. Players keep time with the one-of-a-kind Sex Panther mechanical timer (“60% of the time, it works every time!”).

McLaughlin, previously an Advertising Creative (Hot Wheels, Honda, Red Bull) and Lautenschleger, a Television Development Executive (NBC’s Songland), approach all of their games with a focus on entertainment that inspires creativity, laughter, and connection. Barry said, “Getting to make a party game based on our favorite comedy from this millennium is a dream come true”. Jason added, “Our goal is to delight fans of the film while still being a hilarious party game for anyone who has never seen it!”

About Barry & Jason Games and Entertainment: Barry McLaughlin and Jason Lautenschleger, the toy inventors behind this party game, met on their first day of college 24 years ago, and have been collaborating ever since. After being contestants on 10 game shows between them (Jeopardy! for Jason, and a Showcase Showdown win on The Price is Right for Barry) they decided to host their own game nights, which quickly turned into their first party game Game Night in a Can. They followed that up with Toy Industry Association’s Toy of the Year Finalist Dr. Biscuits’ Radical Road Trip, a unique travel game. Find more information at www.barryandjason.com and interact with the company on Facebook, Instagram and YouTube.