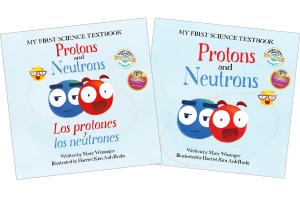 Protons and Neutrons will be released in bilingual (English/Spanish) and English paperbacks on September 7. 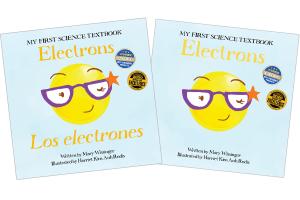 Electrons will be released in bilingual (English/Spanish) and English paperbacks, also on September 7.

Light-hearted, scientifically accurate chemistry books on subatomic particles spark scientific curiosity in kids of all ages, in English and Spanish!

Every child should have a basic understanding of what they—and the entire universe—are made of.”
— Ryszard L. Pisarski, astrophysicist

WASHINGTON, DISTRICT OF COLUMBIA, UNITED STATES, September 3, 2021 /EINPresswire.com/ — Science Naturally is excited to announce the simultaneous release of the final two books in the award-winning My First Science Textbook series in both English and bilingual (E/Sp) paperback editions.

After mastering life’s essential building blocks with Atoms and Atoms / Los átomos, young readers and aspiring scientists alike will love Protons and Neutrons and Electrons. This is the story of subatomic particles as never seen before: stimulating tales of universal friendship and chemistry that foster imagination and creativity while also encouraging kids to think critically about their surroundings, particularly at a microscopic level.

Mary Wissinger, author of the series, demystifies intimidating topics in science for students of all ages. In this introduction to the personified components of an atom, Wissinger explains some of the most fundamental concepts of chemistry in a way that kids can enjoy.

These adorable books, perfect for children ages two to seven (and beyond!), use catchy rhymes and engaging illustrations to make the basics of the particles more accessible and interesting. Science is introduced in a way that is memorable, educational, and fun. As astrophysicist Ryszard L. Pisarski says, “Every child should have a basic understanding of what they—and the entire universe—are made of. This book is a particularly good way to kick off a conversation on particles. In fact, next time you tell your children that they matter, be sure to include that they are matter!”

Originally published by Genius Games, LLC, My First Science Textbook began as an English hardback series in 2016. Fully funded by a Kickstarter campaign that brought in over $100,000, they proved to be wildly popular among parents, teachers, librarians, and readers, highlighting a shared desire to teach small children big concepts by introducing STEM education early.

The bilingual editions, Protons and Neutrons / Los protones y neutrones and Electrons / Los electrones, will complete the English/Spanish language series. These titles, like all world language editions published by Science Naturally, contribute to a long-standing mission of creating accessible materials for all readers and keeping non-native English speakers, as well as Spanish language learners, excited and inspired to learn more about STEM topics.

As Noureddine Melikechi, Ph.D, Dean of the Kennedy College of Sciences at UMass Lowell, says, “You’re never too old or too young to learn about the fundamentals of nature. These elementary particles welcome us into their world with a touch of sagacity and a beautiful invitation to imagination.” These books have already earned numerous awards, including the Creative Child Magazine Seal of Excellence, a Brain Child award, a Parent’s Picks award, and have been selected as a Parent’s Favorite Product by Tillywig Awards.

A complementary Teacher’s Guide, available in English, can be downloaded from the publisher’s website at no charge. Complete with hands-on activities, articulations to the Next Generation Science Standards (NGSS), and supplemental information about subatomic particles, atoms, and elements, the All About Atoms Teacher’s Guide is an invaluable resource for all parents and educators.

In addition to writing the My First Science Textbook series, author Mary Wissinger, is a former teacher. She has also written the award-winning Science Wide Open book series on famous female scientists. Forthcoming titles in the Science Wide Open series include Women in Botany, Medicine, and Engineering. Mary lives in St. Louis and can be reached at Mary.Wissinger@ScienceNaturally.com.

Artist Harriet Kim Anh Rodis began illustrating books at the age of 17 and has been a part of several publications since. She enjoyed the challenge of making microscopic particles come to life for children. She lives in the Philippines, and can be reached at Harriet.Kim.Anh.Rodis@ScienceNaturally.com.
Science Naturally is a small independent press in Washington, D.C. Our books are distributed to the trade by the National Book Network [NBNbooks.com (domestic) and NBNi.co.uk (international)].

For more information about our publications, for direct or bulk purchase pricing, or to request a review copy, please contact us. Cover images and sample content are available at ScienceNaturally.com.